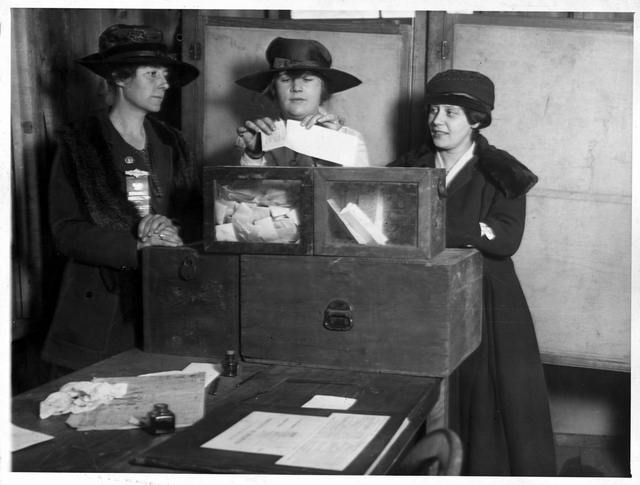 The Eastman School of Music is pleased to collaborate with the Susan B. Anthony Center for Women’s Leadership in presenting Women’s Voices, a special concert offered as part of a year-long celebration throughout Rochester of the centennial of women’s suffrage in New York State.

The concert will feature the Eastman Women’s Chorus, Eastman students, and faculty members including pianists Tony Caramia and Sylvie Beaudette, mezzo soprano Kathryn Cowdrick, soprano Teresa Ringholz, and violinist Rebeca Boyd. During the concert, texts and photographs from the suffragist era will alternate with the musical selections.

The program will showcase music by women composers, including the premiere of Are Women People?, a piece for vocal quartet and piano four-hands by New York State native Lori Laitman. The new work is based on poetry by suffragist Alice Duer Miller, speeches given by Susan  B. Anthony, and the text of the 19th Amendment. Other premieres include works by Jon Lin Chua, Amanda Jacobs, and Jennifer Mitchell.

As part of the celebration, composer Lori Laitman will spend two days at Eastman coaching performers for the premiere and giving a lecture The Scarlet Letter: From Page to Operatic Stage. Speaking about The Scarlet Letter, her first full-length opera with librettist David Mason, Ms. Laitman will discuss the musical and social themes of the opera as well as the journey of bringing a work from page to operatic stage, culminating in the 2016 World Premiere with Opera Colorado.

The Scarlet Letter: From Page to Operatic Stage A lecture by composer Lori Laitman Saturday, March 4, 2017 at 7:00 p.m. in Howard Hanson Hall