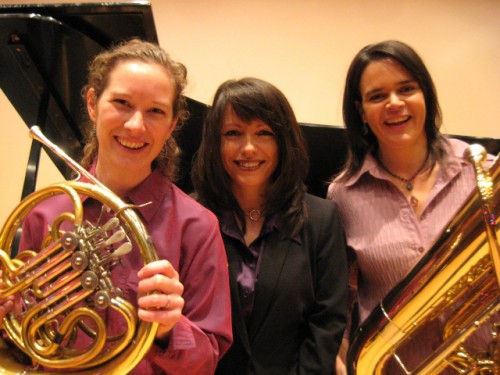 Lin Foulk and Deanna Swoboda formed TubaCOR in 2005 to commission and perform works for horn and tuba.  The ensemble has performed at the International Horn Symposium in Denver, CO; the International Women’s Brass Conferences at Humber College (Toronto) and Illinois State University; the Midwest Horn Workshop at UW-Stevens Point; and residencies at the University of Iowa (as recipients of the Ida Beam Distinguished Visiting Professorship), Georgia College & State University, Southeastern University (TX), and UW-Milwaukee. A resident ensemble at Western Michigan University, TubaCOR has performed on the WMU campus for dozens of campus events and was a featured soloist with the String Orchestra of Kalamazoo in 2010.

TubaCOR programs always include works by female composers.  Both performers have researched music by women and as a result have unearthed many rarely-performed pieces that serve an important place in the musical canon.  Most recently TubaCOR commissioned and premiered Elizabeth Raum’s Color Code for horn, tuba, and piano.  Dr. Foulk and Dr. Swoboda will co-host the International Women’s Brass Conference at Western Michigan University June 6-9, 2012.

Lin Foulk is Associate Professor of Music at Western Michigan University, where she teaches horn and performs with the Western Brass Quintet and the Western Wind Quintet.  She has recently performed with Boston Brass, Monarch Brass, the Fontana Chamber Ensemble and regularly performs in Michigan with the Grand Rapids, Kalamazoo, Battle Creek, and Southwest Michigan Symphony Orchestras.  In the summer she is on faculty at the Kendall Betts Horn Camp in Lyman, New Hampshire.  Especially interested in music with horn by female composers, Foulk has performed and presented lectures on works by women and female performers at numerous festivals and universities across the United States.  She was a Guest Artist at the International Horn Symposium in Valencia, Spain and also performed as a soloist at the IHS Symposia in Denver, CO and Tuscaloosa, AL.  Her solo disc, “Four Elements: Works for Horn and Piano by Female Composers” was released in 2004 and is available through her website, www.linfoulk.org.  She currently serves on the Board of the International Women’s Brass Conference and served for six years on the Board of the International Alliance for Women in Music.  Dr. Foulk received degrees from the University of Wisconsin-Madison and the University of Missouri-Kansas City.

Deanna Swboda is Assistant Professor of tuba and euphonium at Western Michigan University and performs regularly with the Western Brass Quintet, a resident brass quintet.  Prior to joining the WMU music faculty, Swoboda toured with the Dallas Brass, performing hundreds of concerts in the United States and Europe.  Swoboda is the creator and performer of a band recruiting video and music workshop called “Band Blast Off.”  Her solo CD, “Deanna’s Wonderland,” was released on Summit Records in 1999.  Her new solo tuba CD is entitled “Shamanic Journey” and features the music of women composers and it is available through Potenza Music.  Ms. Swoboda currently serves as Vice President/President elect for the International Tuba Euphonium Association as well as Secretary for the International Leonard Falcone Euphonium Tuba Festival.  Ms. Swoboda is a tuba artist for Miraphone.

A native of Chicago, Helen Lukan is in great demand as a freelance pianist in the Southwest Michigan area.  She received her Bachelor of Music from Bradley University, majoring in piano, under the instruction of Edward Kaizer and a Master of Music in Piano Performance with a minor in Jazz Studies from Western Michigan University where she studied with Phyllis Rappeport and Dr. Robert Ricci.   She has served as the accompanist for the Kalamazoo Bach Festival Choir, the studio accompanist for The Farrell Ballet Theatre at Kalamazoo College and she served 12 years as the accompanist for The Kalamazoo Singers Choir.  Presently, Helen is a featured soloist for special gatherings for the President of WMU, the accompanist for  The Department of Dance at Western Michigan University, solo pianist for corporate events at The Fetzer Center, and is a regular substitute pianist for the Kalamazoo Symphony Orchestra, the South Bend Symphony Orchestra, the Grand Rapids Symphony Orchestra and the Battle Creek Symphony Orchestra .  Currently, at WMU and in the greater Kalamazoo area, she accompanies faculty members and students, a diverse range of soloists from vocal performers to brass and wind instrumentalists, performing music from every genre.  In addition, she is the featured pianist on the compact disc, From the Start:  Elizabeth Start, Composer and Cellist (2004   She performed with the Avalon String Quartet in the 2006 Gilmore Piano Keyboard Festival and the 2006 Fontana Chamber of Arts Summer Concert Series.  In October 2007, she performed for the Around Town series at the Krasl Center for Arts with Brad and Betsy Wong.   In 2007 she made her debut at the Kalamazoo New Year’s Fest with the presentation Kaleidoscope of Sound. In 2008, Helen performed with the Renaissance String Quartet at the Krasl Art Center in St. Joseph, MI and in 2009, Ms. Lukan was appointed principal pianist of the Southwest Michigan Symphony Orchestra.   Recently she performed with 3 Trumpets and 88 Keys at the 2008 Kalamazoo New Year’s Fest and in February 2009 she performed with Maestro Raymond Harvey (KSO) for the Symphony Epic Series.  Ms. Lukan continues to give concerts collaboratively all over Southwest Michigan.