The Women in Music Festival is proud to welcome Lorraine Desmarais as its guest composer for 2012.  Ms. Desmarais will be in Rochester for a four-day residency, March 28-31, 2012, which will include open rehearsals, coachings, and a lecture-presentation at the Eastman School of Music.  Eastman’s New Jazz Ensemble, directed by Dave Rivello, will join Ms. Desmarais for a concert on Saturday, March 31 at 8 pm in Kilbourn Hall. 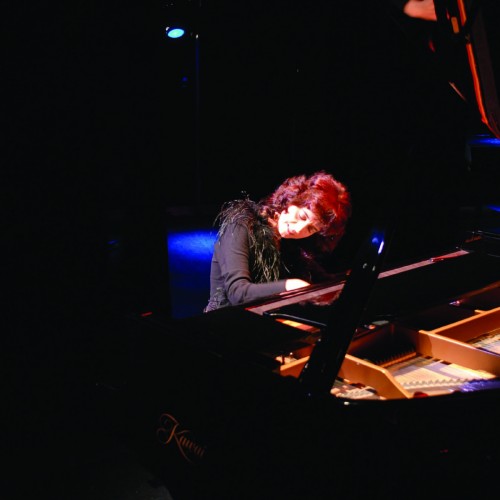 “Canadian pianist Lorraine Desmarais is a power-packed dynamo in which echoes of Evans are transformed by the pianist’s powers of invention, relentless momentum, and technical panache.  Brava Desmarais !” (Jazz Times magazine)

Working with her long-time collaborators Camil Bélisle and Frédéric Alarie, Lorraine Desmarais constantly pushes the limits of the jazz trio format. In addition to frequently performing piano solo or with small ensembles, she guests with prestigious symphony orchestras, including the Orchestre Symphonique de Montréal and the Orquesta Sinfónica de Galicia, in Spain.

Lorraine Desmarais also has to her credit 10 CD’s as a leader and many others as a side woman working with Alain Caron, Jim Corcoran and the New York Big Band Diva.  She wrote several film scores, including works for the National Film Board (Canada).  Upon special commission, she wrote a flute and piano sonata featuring duettists Lise Daoust and Louise Bessette, and, XIII-Thème et Variations, for violinist Angèle Dubeau and La Pietà.  She also lead a musical radio program entitled « Lorraine Desmarais reçoit… » for Radio-Canada-CBC.

Please visit the festival’s website again in March for details about featured composers and repertoire.