It is with great pride and a healthy dose of awe that we introduce two fresh alumni of the Eastman Community Music School who are bound for advanced study of historical performance on the baroque violin. After studying the instrument with baroque violinist and ECMS faculty member Boel Gidholm, both Erik Schroeder and Liza Sommers have made plans to pursue their studies further after graduation. In the spring semester, I got the chance to correspond with both students and find out how they became so deeply involved with such an unusual instrument for a teenager to love.

What first inspired you to focus your studies on baroque violin?

Erik: I began studying modern violin performance when I was 5 years old, and continue my studies with Mr. Marcos Kreutzer at the Hochstein School of Music. Several years ago I discovered I had an affinity for the music of the 17th and 18th centuries, particularly for the Galant style (which is to say, the music of J.C. Bach, Haydn, Mozart, Gluck, etc.). After I discovered Historical Performance, I began to play the baroque violin, which I have since fallen in love with. 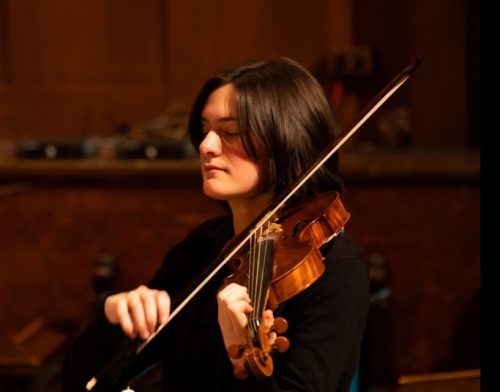 Liza: Having attended Christ Episcopal Church in downtown Rochester since early childhood, I have had ample opportunities to hear Baroque music performed by excellent organists on Eastman’s Craighead-Saunders organ (a process reconstruction of a Casparini organ built in 1776 which still stands in Vilnius, Lithuania today!), and by the Schola Cantorum, of which I am now delighted to be a member. Also strongly compelling to me about early music is that it is inextricably tied to history! I am endlessly fascinated by Medieval and Renaissance European history, and one cannot study the music of these eras without learning about the political, religious, and intellectual contexts out of which it rose.

I had been in love with the style for quite a while before making the decision to switch to studying the Baroque violin. As I progressed on the modern violin, I was more and more drawn to the earlier music and had no desire to learn showy Romantic pieces. It was in February of last year that I began – at last! – to study Baroque violin. My mother asked a friend of ours, a Baroque cellist, if she knew a Baroque violinist in Rochester who could teach me. Boel Gidholm’s was the name she recommended, a brilliant teacher and one of the most marvelous people I have ever known. It is a joy and an honor to be her student.

Liza: If there is a musician who can identify with conviction her favorite piece of music, please introduce me to her! I have no single favorite, but a few pieces resonate with me especially. From the Baroque, Samuel Scheidt’s Ludi Musici are breathtaking and sublime. About two and a half centuries later came Edvard Grieg’s Holberg Suite, which is uniquely delightful.

Erik: This is a difficult question! It’s hard to choose just one piece from the longest era in musical history. As a violinist, I am inclined to say Corelli’s Opus 5 violin sonatas for their historical importance as well as for their beauty, but I would have to say that my personal favorites are the later Mozart operas (for example, Le Nozze di Figaro, Don Giovanni, and Die Zauberfloete). 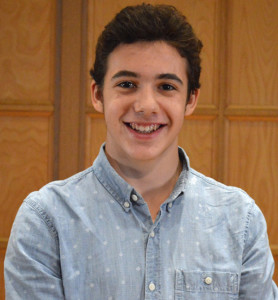 What is the biggest difference for you between performing on baroque violin and modern violin?

Erik: I find that Historical Performance offers an incredibly refreshing outlook on music. This type of performance is very organic and personal. The biggest difference, I think, comes from the fact that, as a period musician, I approach this music from a historically informed perspective . This requires me to be more than just a violinist; rather, it means that I need to be something more like the eighteenth-century definition of a Musicus, that is, a musician who is truly knowledgeable in all aspects of their art. Of course, a lot of work is required to get there — and I don’t pretend to be there yet! There is always more to learn, and I think this is also what I love most about Historical Performance.

Liza: The sentiment. Early music, like plenty of later music, of course, is profoundly emotive and intensely collaborative, but it feels less demanding and more personally engaging. Its virtuosity consists not in its pushing the limits of the performer’s technique and the instrument’s range, but rather in its creative, improvisatory nuance. It is the music of sanctuaries and royal courts, not of enormous concert halls. It feels more introspective, more intimate.

I think of historically informed performance not as a resurrection but rather as a return; that is, not dragging the past into the present, but rather stepping back into the past for a restorative break from modernity. To play early music is to lose oneself in the echoes of a former world. Early music is thus imbued with a sense of wonder and peculiar nostalgia. It has a mysterious allure – indeed, it takes on something of a fantastical quality – because it belongs to a time and space so long past that it feels magical. Early European history is also like this; in looking at the ways the people of Medieval and Renaissance Europe dressed and painted and treated illnesses and punished criminals, one feels like she is reading fairy tales rather than learning about real people and their lives. And when one realizes that all of this is real and true, that this is what the world once looked and sounded like, that living individuals wrote and spoke and danced and painted and composed because human beings everywhere and always have a will to beauty, and that now, hundreds of years later, that beauty resonates with us… It’s marvelous. Ineffably marvelous. Ineffable. All I can do is ramble romantically about it and hope that something coherent turns up. Also, more directly to the question, mean tone is gorgeous. Once you have heard pure thirds, sixths, and sevenths, you will forever after regard the intervals on an equally-tempered piano with a twinge of nausea.

What are your plans for the future?

Liza: I know that I am going to study early music and Medieval European history, most likely at the Jacobs School of Music and Indiana University. I love the idea of graduate school in Europe, where I may well decide to live. I have difficulty imagining exactly what my career will look like, though; I want to play in an early music ensemble, and I wouldn’t mind living in the world of academia. I’m excited to see whatever the future may hold.

Erik: I am planning to study baroque violin performance in Europe.

*Update: Both students were accepted to undergraduate degrees in historical performance at Oberlin Conservatory (where they were the first undergraduate string applicants) and Indiana University! Liza has indeed chosen to attend IU in the fall, studying historical performance. Erik was also accepted to study at the Mozarteum in Salzburg, Austria, where he will pursue his degree in Early Music Performance. Congratulations to both!*

And finally, when you aren’t playing violin, what do you like to spend time doing?

Erik: Keeping consistent with my performance interests, I also devote a lot of time to historically informed composition, partly out of my love for the music of this era but also to gain a better understanding of what it meant to be a musician in the eighteenth century. I also find that these types of efforts are important, especially in the twenty-first century as numerous audiences are looking to return to accessible and understandable music after the rise of expressions such as atonality and serialism in the twentieth century (the same conditions that helped Historical Performance to flourish and continue to grow in the first place). In addition, I am interested in studying history, art, and literature, and I also enjoy playing tennis.

Liza: When not playing the violin, I am likely to be found attempting to play the cello, communing with my family, listening incessantly to Bach’s third Brandenburg Concerto, or reading about the great pestilence of 1346-1353, which has long been a morbid fascination of mine.

If this post has piqued your interest in historically informed performance and baroque music you can find lots of opportunities to engage with this repertoire right here in Rochester! In addition to private lessons at ECMS, we offer two baroque ensembles, one is led by Boel Gidholm on period instruments, and the other is led by Christopher Haritatos on modern instruments. All offerings are open to students who wish to learn, meet weekly or bi-weekly, and perform in recitals here at Eastman. If attending as an audience member is more to your liking visit Publick Musick, Pegasus Early Music, or the Rochester Early Music Festival and feast your ears on this sublime repertoire!