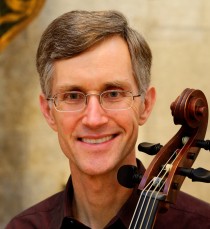 Haritatos has gained a reputation as a passionate and intelligent performer on both the baroque and modern forms of his instrument. As a baroque cellist he has played in ensembles such as the Handel and Haydn Society (Boston), Ars Lyrica (Houston), and Tafelmusik (Toronto), as well as acting as the continuo cellist of Fiori Musicali-Barockorchester Bremen and Apollo’s Fire (Cleveland). Equally accomplished as a modern cellist, Chris is now based in Rochester, NY, where he is a member of the Rochester Philharmonic Orchestra, co-directs the period-instrument ensemble Publick Musick, plays with Pegasus Early Music, and is the cellist of the baroque chamber ensemble Fioritura. Also sought after as a teacher, he currently teaches at the Eastman Community Music School, has been on the faculty of Texas State University-San Marcos, and has given numerous workshops and master classes at colleges and universities including the University of North Texas, the University of Virginia, Luther College, and SUNY-Fredonia. A native of the San Francisco Bay Area, he studied at the University of Chicago, the Cleveland Institute of Music, the Eastman School of Music and as a Fulbright Scholar at the Akademie für Alte Musik Bremen.