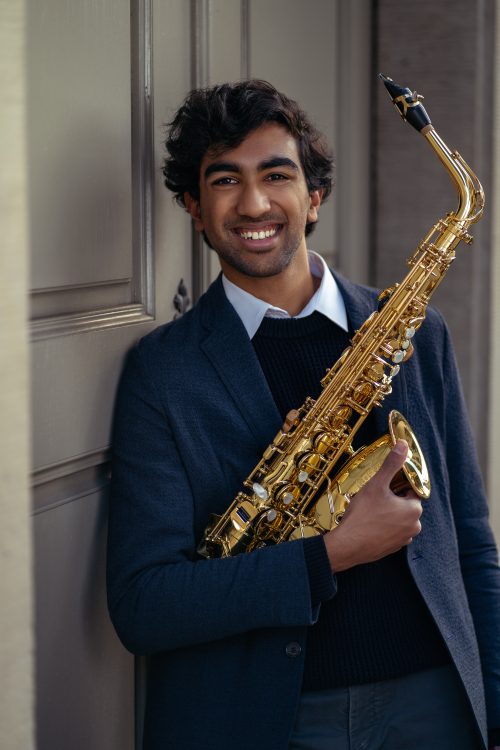 Uday is the soprano saxophonist of the award winning Scio Quartet, founded at the Eastman School of Music in 2016. Scio focuses on presenting new music to new audiences, and has developed a strong reputation for being able to inspire conversations about music and the saxophone with previously unfamiliar listeners. With the quartet Uday has performed across the United States at a variety of community focused locales, such as senior centers, libraries, schools, and hospitals. In January 2019 Uday also coordinated and executed a weeklong residency for the quartet at Saratoga High School in Saratoga, CA during which the quartet assembled and rehearsed with a saxophone ensemble composed of students from the school to present a joint concert for the local community. Additionally the quartet presented smaller interactive concerts and workshops at four other nearby middle and high schools. Scio is also active on the competition circuit and maintains a high level program of contemporary and traditional music for saxophone quartet, performed primarily from memory. Notably, Uday performed with Scio as a featured ensemble in the Terrace Theater at the Kennedy Center for the Performing Arts in Washington D.C.. The Scio Quartet received 1st prize in the 2017 198th Army Band Solo Competition and the 2019 Music Teachers National Association Chamber Music Competition. Most recently the quartet was awarded the Bronze Medal in the 2020 Fischoff National Chamber Music Competition.

Uday completed his bachelor’s degree at the Eastman School of Music with Professor Chien-Kwan Lin. At Eastman Uday performed regularly with the Eastman Wind Ensemble, the Eastman Jazz Lab Band, and the Eastman Saxophone Project, in addition to appearing on the Dean’s List for six semesters and studying a variety of additional subjects from film studies to Turkish history. Uday has also worked with many other renowned saxophonists, including Dr. Frederick L. Hemke, Vincent David, and SFC Douglas O’Connor, among others. Uday recently completed a masters in music performance degree with Professor Lars Mlekusch at the Zurich University of the Arts (ZHdK) as the recipient of a Fulbright Grant and a Swiss Government Excellence Scholarship. At ZHdK Uday wrote and successfully defended a thesis examining the relationship between minimalist music and postmodernism by highlighting the ways this relationship manifests itself in the music of Steve Reich and Michael Torke. His solo work at ZHdK was primarily focused on the intersections of electronic music and free improvisation with an emphasis on the capabilities for organic performances with interactive tools.

Currently Uday is pursuing a doctor of musical arts degree at the Eastman School of Music under the guidance of Chien-Kwan Lin. In addition to his doctoral studies, Uday participates actively in the Rochester musical community as the saxophone mentor for the New Horizons music program and as a teaching assistant for the Eastman Community Music School.”