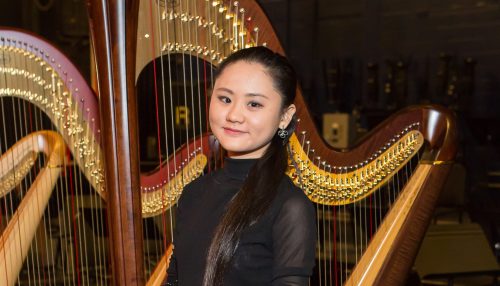 Chinese-Canadian harpist Sunshine Quan currently resides in Rochester NY, where she is pursuing a DMA degree in Harp Performance and Literature at the Eastman School of Music under the generous sponsorship of the Eileen Malone Scholarship.

An avid orchestral harpist, during her time in Canada Sunshine regularly played with orchestras such as Sinfonia Ancaster (Ancaster, ON) and CAST Philomusica (Toronto, ON), and has been extensively involved in the various ensembles at Eastman and the Rochester area since she arrived in the United States. In Summer 2022, Sunshine was Harp Fellow and Principal Harp with the National Orchestral Institute Philharmonic (College Park, MD). Her musical journey has brought her across the world, where she gave solo and chamber recitals in North America and China, and toured Spain with the Toronto Youth Wind Orchestra. A passionate advocate for new music, Sunshine has composed and arranged for solo harp and harp ensemble, given premieres to solo, chamber, and orchestral works, and has worked diligently with composers on new works for harp. Sunshine was a 1st prize winner of the scholarship audition at the Toronto Harp Society in 2015 and a National Gold Medalist for her ARCT performance recital at the Royal Conservatory of Music (Toronto, ON) in 2021. Besides the harp and classical music, Sunshine also plays the Chinese zither (Guzheng), and she is an active performer of traditional Chinese music and Irish/Celtic music.

Sunshine graduated from McMaster University (Hamilton, ON) with an Honours Bachelor of Health Sciences degree and Provost’s Honour Roll Medal, specializing in Biomedical Sciences. For nearly 2 years, she worked as a laboratory researcher in the oncology departments at McMaster Children’s Hospital and Juravinski Cancer Center. She holds an ARCT Diploma in Harp Performance with First Class Honours from the Royal Conservatory of Music and a Master of Music degree in Harp Performance and Literature from the Eastman School of Music. She is forever thankful to her past scientific supervisor Dr. Theodoros Tsakiridis, and her former and current harp teachers Andrew Chan and Professor Kathleen Bride.