Serena Reuten is a German-Canadian conductor 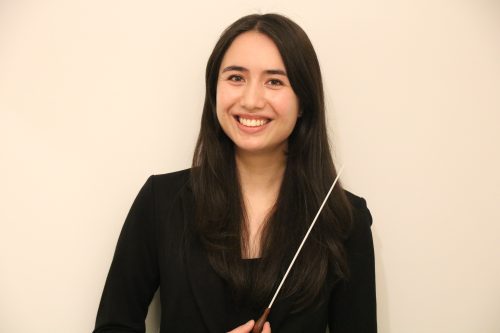 and flautist whose passion for music runs alongside a deep desire to bring communities together. Active in the Ottawa musical community during her undergraduate studies, Serena conducted performances with the Parkdale Orchestra and covered rehearsals for conductors of various ensembles including the Ewashko Singers and the Ottawa Pops Orchestra. Over the past few summers she has also attended several international conducting masterclasses, studying under such conductors as Alexander Shelley, Mark Shapiro, and David Jacobs. Serena completed a Bachelor of Music at the University of Ottawa and a Master of Music in Flute Performance at the University of Montréal. Her past conducting mentors include David Currie, Laurence Ewashko, Jean-François Rivest, and Paolo Bellomia, and she is currently pursuing a Masters in Orchestral Conducting at the Eastman School of Music under Neil Varon.