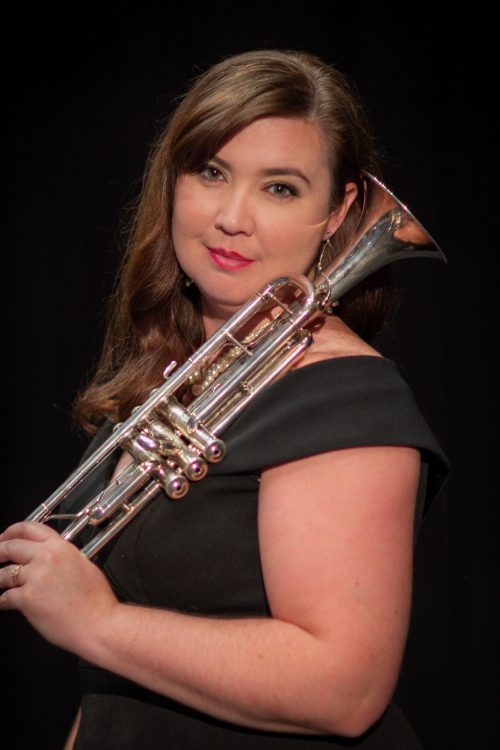 Natalie Fuller began playing the piano at the tender age of 4, and trumpet followed 2 years later. Born and raised in Saskatchewan, Natalie’s 12 years of homeschooling allowed her the freedom to travel across Canada and the United States as well as internationally to Great Britain and Japan with award winning ensembles including the Regina Lions Band (Bob Mossing) and the South Saskatchewan Youth Orchestra (Alan Denike). A short six months after being diagnosed with cancer, Natalie went on to achieve the highest mark in Canada for the Associate of the Royal Conservatory of Toronto diploma in trumpet performance, under the tutelage of Sharie Argue.

At the University of Regina in Saskatchewan, Natalie studied under Dr. Ed Lewis (CBC Radio’s “Jazz Doctor”) and Miles Newman (principal of the Regina Symphony Orchestra). After completing the bachelor’s degree in just three years, Natalie was awarded the President’s Medal, the highest distinction upon graduation. Natalie then moved to Rochester, New York where she studied with the renowned James Thompson at the Eastman School of Music for both a masters and doctoral degree. During her time there, Natalie won 1st place in the brass division of the Canadian Music Festival and placed in the top three at the American National Trumpet Competition several times.

Natalie has performed for a wide variety of audiences, including notable trumpet greats like Stephen Burns, Tom Stevens, John Wallace and Mark Gould to dignitaries including the Governor General of Canada and even Prince Charles. Whether in an ensemble or performing solo with her sister Maria Fuller (an accomplished pianist with a Masters degree in piano performance from the University of Cincinnati College-Conservatory of Music), Natalie loves to play her trumpet. The Fuller Sisters’ repertoire includes a wide range of styles and eras, but Natalie specifically enjoys researching and presenting music that is relatively unknown and off the well beaten trumpet path. Natalie and Maria are currently working on a recording project that would include several of these pieces. in 2015 Natalie won the second trumpet/assistant principal trumpet chair with the Regina Symphony Orchestra and continues to play with them for their Masterworks Series.

Teaching is equally important to Natalie and she maintains an active studio of talented trumpeters. Young or old, beginner or advanced, Natalie is devoted to her students and relishes in their accomplishments. Recently, Natalie has taught at the University of Rochester, Eastman Community Music School and Cornell University. After completing a one year contract as head of brass at Montana State University Natalie returned to Saskatchewan where she taught privately and for the University of Regina. In the spring of 2016 Natalie married the love of her life and transitioned back to Western New York where she is currently teaching brass and theory at the College at Brockport (State University of New York) and Hobart and William Smith Colleges.