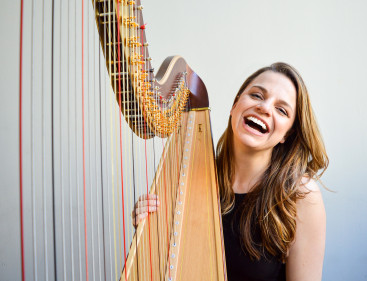 Praised for her “superb technical acumen and sensitive musicality” (South Florida Classical Review), Grace Browning has established herself as a versatile ensemble harpist, dynamic soloist, and passionate teaching artist. Equally at home with both symphonic and operatic repertoire, Grace was appointed Principal Harpist of the Rochester Philharmonic Orchestra in 2017 and the Santa Fe Opera in 2015; she can be heard on both ensemble’s GRAMMY award-winning albums: The (R)evolution of Steve Jobs and American Rapture. Co-founder of the Browning-Krug Duo, Grace appears regularly with her cellist-husband Benjamin Krug with whom she arranges, improvises, and performs popular works for diverse audiences.

Grace’s love for opera began in 2014 when she won her first position as Principal Harpist of The Dallas Opera. In 2018, she made her debut with the Metropolitan Opera, performing Puccini’s Tosca, Bizet’s Carmen, and Wagner’s Siegfried. During her time in Texas, she regularly performed with the Dallas Symphony and the Philadelphia Orchestra, and was invited to perform as Guest Principal during the Houston Symphony’s 2018 European Tour. She has participated in music festivals around the globe, including the Tanglewood Music Center, Spoleto Festival USA, Aspen Music Festival, Pacific Music Festival, and the National Repertory Orchestra.

A natural and charismatic presence on stage, Grace appears regularly as a soloist with Omaha Symphony, Rochester Philharmonic Orchestra, Pacific Symphony (CA), and the New World Symphony (FL) where she was the Harp Fellow from 2011 to 2014. Following her three-year fellowship there, she was invited back to return as a coach and a featured performer at Michael Tilson Thomas’ 70th Birthday Gala. As a versatile chamber musician, she performs regularly with Santa Fe Chamber Music Festival, Chatter ABQ, The Society for Chamber Music in Rochester, and in her own interactive concert series, Chamber Music at San Miguel Chapel in Santa Fe, New Mexico.

Born into a large, musically-enthusiastic family, Grace has made it her life’s work to inspire and connect with others through the power of music. A passionate Suzuki-trained teaching artist and performance psychology coach, she is thrilled to be joining the faculty at Eastman Community Music School and the Kanack School of Musical Artistry in Rochester, New York. Previously in Dallas, she taught for two years at the Suzuki Music Institute of Dallas, teaching individual and group classes and working with students of all backgrounds and disabilities. As a collegiate teacher, Grace served as harp professor at the University of Denver Lamont School of Music from 2020 to 2021 and taught masterclasses at the University of Arizona, UNC School of the
Arts, Roosevelt University, and the Curtis Institute of Music. A strong advocate for mental health, she has led multiple workshops on performance anxiety for the American Harp Society and contributes regularly to the Harp Column magazine and online academy.

Originally from Mountain Lakes, New Jersey, Grace received her Master of Music degree from the Juilliard School in 2011, following two years at the University of Michigan (B.M. 2009) and two years at the Eastman School of Music. In her spare time, Grace teaches Ashtanga yoga, performs with her cellist-husband Benjamin Krug, and enjoys spoiling their sweet rescue animals: Annie and Pippa.