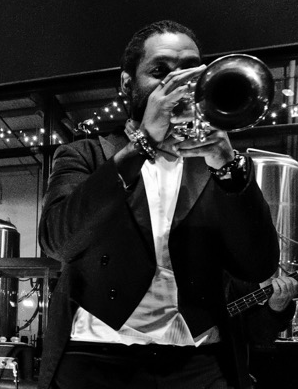 Herb Smith is the third trumpet with the Rochester Philharmonic Orchestra. He is a graduate of The Eastman School of Music and began playing in the orchestra after he graduated in 91’. He works with students through the Young Audiences of America and Rochester City School District Artist in Residence program. He also travels all over the upstate NY area doing workshops and presentations for many Arts Organizations dealing with classical music, and the accessibility to this music for non musicians, traditional music, from many countries around the world, and jazz music, emphasizing it’s importance as one of the only original American music forms.

Herb also plays many gigs with his jazz quartet, is a frequent substitute player for the Chautauqua, and Buffalo Philharmonic Orchestras. Furthermore he is trumpet instructor for the Community Education Division of the Eastman School of Music, his alma mater, and has a trumpet studio that he teaches out of his home. He has played with many notable artists, including, Al Jareau, Natalie Cole, Doc Severenson, The Ojays and has played on many commercial jingles recorded in Rochester NY. Other ventures include composing music for silent films, and writing musical arrangements for local bands in the area.

Herb is also the cofounder of a new smooth jazz group named Thornwood. Thornwood is a collaboration between Herb and Marcus Robinson, a guitarist, playing original compositions and smooth jazz arrangements. Their first CD in titled “Just A Little Sly” was greatly received and a new CD will be coming soon.