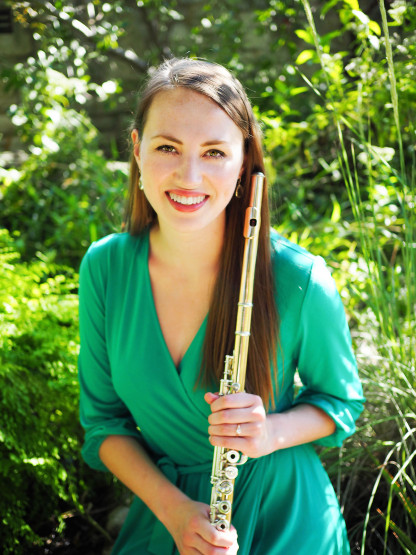 As a native to the Rochester area, Hayley Grainger is thrilled to join the Rochester Philharmonic Orchestra playing Second Flute and Piccolo. Additionally, she recently joined the faculty at the Eastman Community Music School as a Flute Instructor. Hayley previously held the position of Second Flute/Piccolo with the Chattanooga Symphony and Opera. During her time in Tennessee, she performed as a guest with the Knoxville Symphony Orchestra, Huntsville Symphony Orchestra, Symphony of the Mountains as well as the Scenic City Chamber Society. Previously, Hayley served as the Teaching Assistant to Marianne Gedigian at the University of Texas at Austin’s Butler School of Music, where she graduated with her Master of Music in Flute Performance in 2019. Previously, she graduated valedictorian summa cum laude with her Bachelor of Music in Flute Performance from Boston University’s College of Fine Arts, where she studied with Linda Toote.

During her time in Boston, Hayley received several noteworthy awards including co-winner of the 2017 Boston Woodwind Society Doriot Dwyer Flute Memorial competition, the William H. Grass award in the James Pappoutsakis Memorial competition, named a finalist in the New York Flute Club competition, named a finalist in the Boston University Concerto competition, named Boston University’s Presser Scholar, and inducted into the Pi Kappa Lambda society. In addition to her recent auditions and competitions, Hayley was named a winner of the Boston Philharmonic Youth Orchestra concerto competition in 2015 where she performed the Chaminade Concertino with the orchestra in Sanders Theater. She was a member of the notable BPYO in all performances between 2014 and 2017. During this time, the organization was named “2015’s best orchestral performance” by Arts Fuse for their Symphony Hall concert in November where Hayley played principal flute on Debussy’s “La Mer”. Her performance in the BPYO’s performance of Wagner’s “Siegfried Act Three” was also listed in the Boston Globe’s “Ten Best Performances of the year.”  In June 2015 and 2016, Hayley performed on the BPYO’s European and Spain tours which included acclaimed performances in Prague, Pilsen, Berlin, Basel, Interlaken, Bern, Lucerne, Barcelona and Madrid.