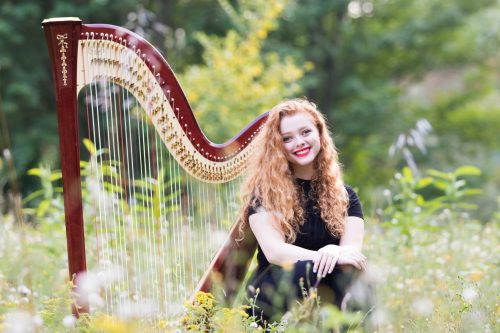 Elizabeth Ojeda is a professional harpist, centered in both the Hudson Valley/NYC Metropolitan Area, and the Greater Rochester Area.
She has earned all of her education from the Eastman School of Music, having completed a Master of Music degree in Harp Performance and Literature, as well as a Bachelor of Music degree in Harp Performance, a Bachelor of Music in Music Education, and a Performer’s Certificate for outstanding performance ability.
Elizabeth made her Carnegie Hall debut at the age of 11, and since then has toured the East Coast performing privately and publicly, refining her craft.
She has appeared with professional orchestras along the East Coast, including the Westchester Philharmonic, and the Taconic Opera Company. Her most lauded orchestral competition landed her and her fellow performers the title of National Grand Champions at the American String Teacher’s Association Festival in 2014.
In November of 2016, she was awarded first prize in the Eastman School of Music’s Harp Concerto Competition, and appeared alongside Renee Fleming in a world premiere work based on the paintings of Georgia O’Keefe, “Letters From Georgia” at Alice Tully Hall, in Lincoln Center.
In May 2017, Elizabeth was awarded the Robert Wayne Barlow Harp Prize for Excellence in Harp Performance at the Eastman School of Music, and soon after, returned to Carnegie Hall to perform J.A.C. Redford’s “Night Pieces”.
Most recently, she is the Adult Category Winner in the IBLA International Performing Competition. She will play on a solo program in Carnegie Hall in 2021.

Elizabeth is on the faculty of the Eastman Community Music School, where she teaches “Theory in Motion”: “…a five-level program focusing on aural and kinesthetic musical understanding, music literacy, and musicianship”, and substitute teaches the Rochester Young Children’s Chorus. She is also on the faculty of Pine Brook Elementary School, in the Greece Central School District. She teaches fourth and fifth grade Orchestra, as well as kindergarten and specialized K-5 General Music.