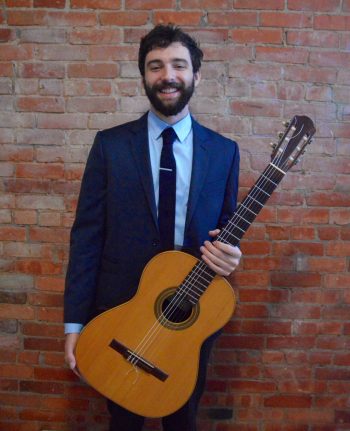 Anthony LaLena is a versatile young guitarist currently residing in Rochester, New York, where he is pursuing a Doctor of Musical Arts degree at the Eastman School of Music. He serves as a teaching assistant for Dr. Nicholas Goluses, lecturing on guitar history, fretboard harmony, pedagogy, and teaches private lessons.

Anthony grew up on Long Island, New York and began his studies in music in New York City with guitarist and lutenist, William Zito. While continuing his studies at the State University of New York at Fredonia, he was a member of the renowned Fredonia Guitar Quartet. After a performance at Le Musée de Jouet in Colmar, France, they were hailed as a “remarkable guitar quartet” by the city’s newspaper, L’Alsace. Recent engagements include concerts in Germany, France, Spain and New York City.

A naturally inquisitive disposition lead Anthony to Spain in order to study plucked-string repertoire of the sixteenth century and nineteenth century guitar history at the Conservatorio de Musica de Manuel Castillo in Seville. Anthony has also studied Baroque performance practice and arrangement with the celebrated harpsichordist, Dr. Kenneth Cooper, at the Manhattan School of Music and currently performs in Collegium Musicum, and ensemble directed by the eminent lutenist, Paul O’Dette, and violist, Christel Thielmann.

Anthony actively performs and studies a wide variety of music but takes particular interest in the music of the early twentieth century and contemporary works. He has performed in concerts for the American Composers Alliance in New York City and has commissioned young composer to write for his New York City based chamber music project, Zoo Studies.

Anthony has performed in masterclasses for such distinguished artists as Manuel Barrueco, David Russell, and Eduardo Fernandez. He holds a Bachelor of Music from the State University of New York at Fredonia, where he was awarded a Performer’s Certificate for demonstrating exceptional musicianship. He also holds a Master of Music from the Manhattan School of Music, where he studied under the composer and guitarist, Mark Delpriora. He has most recently been awarded the prestigious Performer’s Certificate at the Eastman School of Music after completing his first year of doctoral studies.

Anthony has published transcriptions for guitar solo and guitar duo with Seconda Prattica. Videos and recordings can be found on YouTube, as well as his website, www.anthonylalena.com.