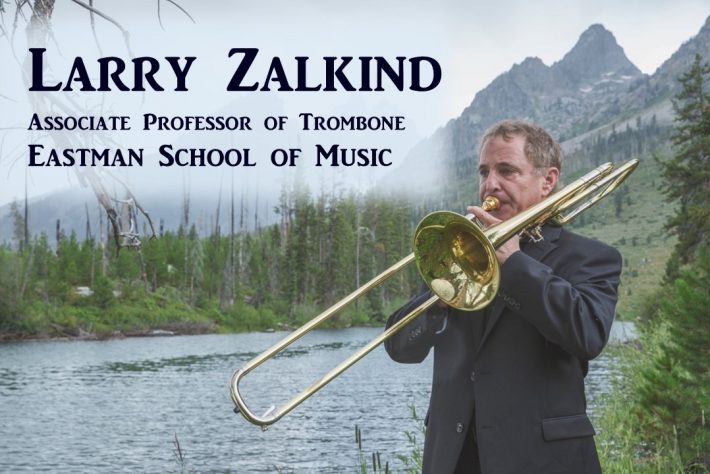 When he was eight years old, trombonist Larry Zalkind jumped at the chance to enter the music program at his local elementary school. Inspired by his favorite group, the Tijuana Brass, he had always wanted to play the trumpet.  But the line moved in alphabetical order by last name, and buy the Z’s there were no trumpets left for him.  His school music teacher Nora Graham settled the issue by declaring, “You look like a trombone player to me!”  His fate sealed, Larry carried the enormous trombone case home from school with the help of a fellow third grader. After studying with Harold Diner and Norman Bernstein, Larry entered the California Institute of the Arts Youth program in the eighth grade, where he coached chamber music with Los Angeles Tubist Tommy Johnson.  By the age of 17, Larry was studying with Robert Marsteller as a student at the University of Southern California.  His other teachers include Arnold Jacobs, Lewis Van Haney, Jimmy Stamp, Tommy Johnson, Ralph Sauer, Dennis Smith, Byron Peebles, Keith Brown, and Terry Cravens.

At USC, Larry double majored in Music Education and Music Performance, earning a Bachelor as well as a master’s degree in Music from USC.  In the fall of 1981, while pursuing his doctorate in Music Performance at the University of Michigan, he won the audition to become the Principal Trombonist for the Utah Symphony.  He held this position (simultaneously serving on the faculty at the University of Utah) until 2015, when he accepted a position to teach trombone full-time at the Eastman School of Music in Rochester, New York.

In 1976, Larry won the Saunderson Award at the Coleman Chamber Music Competition.  He has toured, recorded, and performed extensively as a member of the Summit Brass on trombone and euphonium since 1990, and has also performed and recorded with the Chicago, Atlanta and St. Louis Symphonies, along with performing with the Boston and Seattle Symphonies. He has performed with Chamber Music Northwest in Portland, Oregon; Music of the Baroque in Chicago; the Sitka Music Festival in Alaska; the Colorado Music Festival in Boulder; the Grand Teton Music Festival in Wyoming; the Eastern Trombone Workshop in Washington, D.C.; and the Elkhorn Music Festival in Idaho.  Larry spent the 2009-2010 season performing as Acting Associate Principal Trombone with the Los Angeles Philharmonic.  In 2012, he was a resident artist with the Hyogo Performing Arts Center Orchestra in Osaka, Japan.  Larry has been featured as a soloist with the Utah Symphony, the Fairbanks Symphony, the Southwest Symphony, the West Los Angeles Symphony, the Billings Symphony, the Twin Falls Symphony, the Macon Symphony, the Burbank Chamber Orchestra, and the Central Oregon Symphony, in addition to the New Sousa Band, the Ringgold Band, the Pierce Symphonic Winds, the U.S. Army Orchestra, the U.S. Army Band, and the Denver Municipal Band.  He played solo euphonium with the Long Beach Municipal Band for two years and has also been a member of the Tubadors tuba quartet.

This season, Larry will perform his 35th season at the Grand Teton Music Festival in Wyoming. He will again participate as a member of Summit Brass in the Rafael Méndez/Summit Brass Institute in Denver, as well as the Sitka Fine Arts Festival in Alaska.  He will perform numerous other recitals and give master classes around the country, including Tennessee Tech University, the University of Southern California in Los Angeles and California State University at Fullerton, where he will be guest artist for “Trombone Day.” While in Fullerton, Zalkind will perform as a soloist with Bones West, where he will play bass trombone in a tribute to renowned bass trombonist George Roberts.  He will also be performing the John Mackey Harvest Concerto at Riverside Community College, along with the John Cage Sonata for Sliding Trombone at the Grand Teton Music Festival.  He will again serve as clinician at the National Orchestra Institute at the University of Maryland.

Larry is a Yamaha Artist and has been heavily involved in the design and production of a new large-bore tenor and alto trombone, both of which he currently plays.  Larry is married to Utah Symphony Associate Principal Violist Roberta Zalkind.  They began dating as students at the Music Academy of the West in Santa Barbara, California.  They have three children: Ben, Matt, and Aaron, two of whom have followed in their parents’ footsteps and are pursuing music careers of their own.