Given its importance, Pelléas et Mélisande clearly demands to be center stage in any celebration of Debussy and his music. The work is, in fact, based on a play by the celebrated Belgian writer Maurice Maeterlinck (1862-1949). Born in Ghent and trained as a lawyer, Maeterlinck caught the literary bug in the mid 1880s. He was clearly influenced by the writings of Poe, Baudelaire, and the Symbolist movement: he not only visited Paris for a few months in 1885, where he met Villiers de l’Isle-Adam, but he also met Stéphane Mallarmé, who was to become a staunch ally, in Ghent in 1890. Following the early success of Serres chaudes, a collection of poetry published in 1889, Maeterlinck turned his attention to the theater, completing a string of Symbolist plays: La Princesse Maleine (1889), L’Intruse (1890), Les Aveugles (1890), Pelléas et Mélisande (1892), Alladine et Palomides (1894), Intérieur (1895), Aglavaine et Sélysette (1896), and Ariane et Barbe-bleue (1899). Whereas these works are preoccupied with fatalism, mysticism, and death, Maeterlinck’s later works are more diverse in nature and range from dramas, such as Joyzelle (1903) and L’Oiseau bleu (1909) to entomological works, such as his studies of bees (1900), termites (1927) and ants (1930). He was awarded the Nobel Prize in literature in 1911.

First published by Paul Lacomblez in Brussels in May 1892 and first staged by Aurélien-François Lugné-Poe and the Théâtre de l’Œuvre in May 1893, the story is a macabre interpretation of the classic love triangle. The triangle is set up in Act 1. Heir to the throne of Allemonde, Golaud encounters Mélisande while hunting in the forest. She seems aristocratic and has dropped her crown in a well. Golaud questions her but she discloses nothing about her past. They marry and return to his ancestral home to meet his grandfather, King Arkel, his mother Geneviève, his half-brother Pelléas, and his son Yniold. Pelléas is planning to visit his sick friend Marcellus, but delays his departure when he encounters Mélisande. The triangle starts to breakdown in Acts 2, 3, and 4. When Golaud notices that Pelléas and Mélisande are spending time together, he becomes jealous and warns them to stop meeting; he threatens Pelléas in the castle vaults (Act 3, scene 2) and abuses Mélisande in front of King Arkel (Act 4, scene 2). The triangle is finally ripped apart at the end of Act 4. Pelléas and Mélisande meet one last time outside the castle (Act 4, scene 4). Golaud discovers them and stabs Pelléas with the sword that Mélisande found on his prayer stool. When Pelléas collapses beside ‘Blindman’s Well,’ Mélisande betrays him. Golaud has also wounded her and she flees into the forest. Golaud chases her, after unsuccessfully trying to kill himself. Finally, Act 5 shows Mélisande on her deathbed, having given birth to a baby girl. Golaud is at her bedside, a confused and broken man.

For his part, Debussy became acquainted with Pelléas et Mélisande early in 1893 and attended the play’s premiere at the Théâtre des Bouffes-Parisiens in May 1893. He was clearly impressed and, through the intervention of Henri de Régnier, approached Maeterlinck about setting it as an opera. Maeterlinck gave his blessing on 8 August 1893. Debussy immediately began to map out Act 4, scene 4 and completed the first draft in September and October, though he subsequently revised the score in May 1895. His immediate goal was apparently to set Maeterlinck’s original play as faithfully as possible, but Debussy soon realized that changes were needed and discussed the matter with the playwright on a visit to Ghent in November 1893. No one knows what was said, but Debussy ended up cutting four entire scenes. He then spent the next two years drafting the rest of the opera, starting with Act 1, scenes 1-3 in December 1893-February 1894 and ending with Act 2, scenes 1-3 in June-August 1895.

Although Debussy fussed with the draft over the next few years, he focused his energy on arranging a stage performance with Pierre Larochelle’s Théâtre Libre and Lugné-Poe’s Théâtre de l’Œuvre. But both of them fell through, as did performances at the Comte de Montesquiou’s Pavillon des Muses and the Théâtre de la Monnaie in Brussels. In 1900, however, the Opéra-Comique expressed interest and Debussy set about completing the piano/vocal score. Despite further delays, the event eventually occurred on 30 April 1902: it was produced by Albert Carré and conducted by André Messager with Jean Périer as Pelléas, Mary Garden as Mélisande, Hector Dufranne as Golaud, Félix Vieuille as Arkel, Mm. Gerville-Réache as Geneviève, Mm. Gerville-Réache, Blondin as Yniold, and M. Viguié as the doctor. Fromont subsequently published the piano/vocal score in 1902 and the orchestral score in 1904; Durand published revised versions of the former in 1905 and the latter in 1907.

Pelléas Redux celebrates the accomplishments of Maeterlinck, Debussy, and P. Craig Russell by adapting Russell’s version of Pelléas & Mélisande for the big screen. As regards the images, Christopher Winders has taken all of Russell’s illustrations and used various cinematic techniques to present them in the form of a motion comic. As regards the musical score, Matthew Brown and Dariusz Terefenko have shrunk Debussy’s score down to under two hours, the standard time frame for concert performances. The process of removing music has not been an easy one and has involved trimming some scenes more heavily trimmed than others. As far as possible, the resulting score includes music for every scene with that music appearing in its original order with only minor additions of new material. Dariusz Terefenko has then reorchestrated the music for a chamber ensemble consisting of piano, violin, alto saxophone, trumpet, cello, bass, electric guitar, and synthesizer. To fill out the textures and add even more tension to the performance, this arrangement also includes electronic sounds of one sort or another. The ensemble features faculty, alumni, and friends of the Eastman School of Music: Charles Castleman (violin), Griffin Campbell (alto sax), Clay Jenkins (trumpet), Albert Kim (piano), Ken Lurie (cello), Jason Titus (electric guitar), and James VanDemark (bass), with Dariusz Terefenko (music director, keyboards) and Christopher Winders and Matthew Brown (sound and projections). 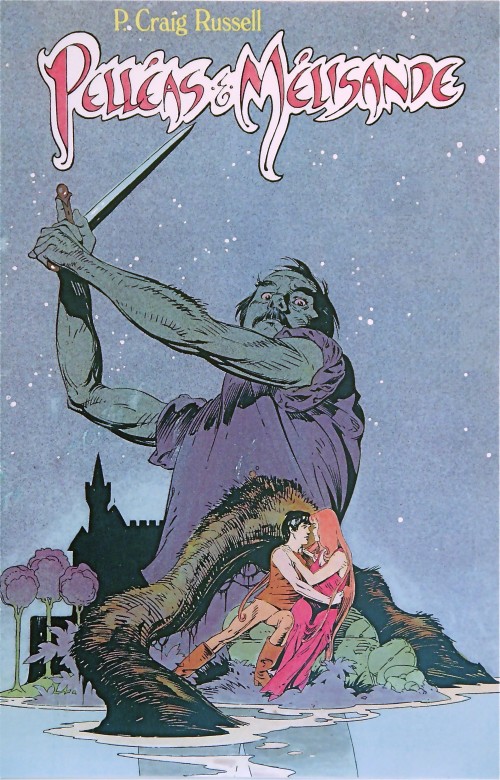 Renowned comic-book artist P. Craig Russell has published an artful version of Debussy’s beloved opera, in his own powerful style. The Eastman School’s presentation on Friday October 26 in Kodak Hall will include a newly reimagined version of Debussy’s score for a small mixed ensemble of instruments with live electronics, all illustrated by panels from that comic-book version. (The video available below gives a sense of the visuals but uses other music.)

Performed on May 7, 1987 in the Eastman Theatre by Eugenia P. Garrity, soprano, in the role of Mélisande, and John Kramar, baritone, in the role of Pélléas, and the members of the Eastman Philharmonia, conducted by David Gilbert.
Dr. Garrity is now a recitalist and voice teacher based in Lakeland, Florida. Mr. Kramar is Associate Professor of Voice, Chair of the Department of Vocal Studies, and Director of the East Carolina University Opera Theater at the East Carolina University School of Music in Greenville, North Carolina. Maestro Gilbert currently serves as Resident Conductor at the Manhattan School of Music in New York City.