All Eastman saxophone students are members of the Eastman Saxophone Project (ESP), which strives to promote the popularity of the saxophone through innovative programming and versatile performances, thereby providing an exciting and invigorating concert experience for a diverse audience. 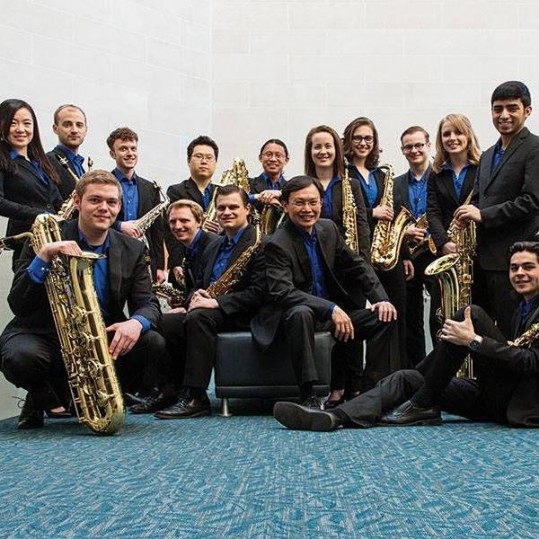 The Eastman Saxophone Project (ESP) is directed by Chien-Kwan Lin and is comprised of his studio at the Eastman School of Music. Colin Crake serves as the ensemble’s Assistant Director and chief arranger. Since their founding in 2010, ESP has quickly become one of the most recognized saxophone ensembles in the world. They made their New York debut at Steinway Hall in 2011, were the featured ensemble at the recent North American Saxophone Alliance Conference and have appeared on National Public Radio through WXXI’s Backstage Pass. In addition to multiple outreach concerts, ESP performs two full-length productions a year in Rochester, New York. The ensemble also made their Kennedy Center debut in 2015, and embarked on a China tour in Beijing, Jinan, Ningbo, and Shanghai in 2016. Archived performances of ESP are shared through the EastmanSaxProject channel on YouTube.

ESP is a Vandoren and Conn-Selmer Artistic Ensemble and endorses Selmer (Paris) saxophones.  The ensemble recently celebrated its 10th Anniversary by launch the ESP Education Series (ESPES). For this and more information, about ESP please visit: www.eastmansaxophoneproject.com