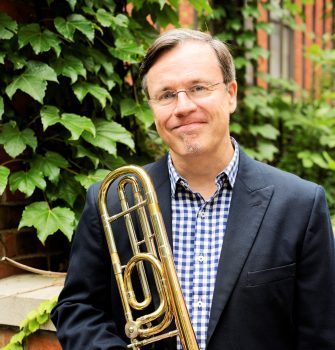 Throughout his career, Mark Kellogg has embraced a wide range of musical roles as a performer, teacher and administrator. Whether it’s taken the form of appearing as a concerto soloist, playing in a variety of chamber ensembles, performing as an orchestral musician or as a jazz player, teaching students of all ages or overseeing artistic programs or festivals, he has been most fortunate to experience a rich array of musical opportunities. In addition to holding the position of Associate Professor of Trombone, Euphonium, and Brass Chamber Music at the Eastman School of Music, Mr. Kellogg is chair of the Winds, Brass and Percussion Department and an affiliate faculty member in the school’s Music Teaching and Learning department. Co-Director of the Eastman Trombone Choir, he also serves as Director for the school’s community engagement program, Eastman To Go.

Inspired by his son’s experiences as an actor, Mr. Kellogg initiated a course under the auspices of the Eastman School’s Arts Leadership Program in 2014 called “Parallels Between Acting and Musical Performance”. This annual class seeks to identify the commonalities between these two art forms and is team taught with two professional actors and arts educators, Skip Greer and Robert Rutland.

Mr. Kellogg recently concluded a twenty-eight year tenure as a member of the Rochester Philharmonic Orchestra. He occupied the Austin Hildebrandt Principal Trombone position and appeared as soloist with the RPO on many occasions, performing the concerti of Tomasi, Albrechtsberger, Larsson, Shilkret and Jeff Tyzik (commissioned by the RPO in celebration of the orchestra’s 80th anniversary), works by Elliott Carter and Fred Sturm and numerous jazz and euphonium solos on the orchestra’s Pops series. Prior to his appointment in the Rochester Philharmonic, Mr. Kellogg performed as a member of the San Francisco Symphony and the National Repertory Orchestra.  In recent seasons, he has also played with the Oregon Symphony, the Florida Orchestra, the Charleston Symphony, the Naples Philharmonic and Symphoria.

Mr. Kellogg has been a frequent guest with the Eastman Wind Ensemble, appearing as soloist in the Eastman Theatre and on tours to Japan and Carnegie Hall with Donald Hunsberger and Mark Davis Scatterday. He has also appeared as a soloist with the Hartford Symphony, the US Army Orchestra, the University of Rochester Symphony, the Youngstown Symphony, the Penfield Symphony, the Hamilton New Music Ensemble and Argentina’s Camerata Eleuthera Chamber Orchestra.

Active as a jazz and chamber musician, Mr. Kellogg was a founding member of the brass and percussion ensemble Rhythm & Brass, touring the United States and Japan and recording four CDs during his two years in the group. He has also performed with Clark Terry, Chris Vadala, Wynton Marsalis, Eddie Daniels, and Mel Tormé. Jazz and commercial recordings include collaborations with Jeff Tyzik, Gene Bertoncini, Allen Vizzutti, Steve Gadd, Gap Mangione and as a member of the Dave Rivello Ensemble. His jazz recording with Eastman School faculty colleague pianist Tony Caramia, Upstate Standards, celebrates the music of upstate New York composers Harold Arlen, Alec Wilder, and Jimmy Van Heusen. Mr. Kellogg’s most recent CD, Impressions, is a collection of French music for trombone and piano, featuring pianists Joseph Werner and Christopher Azzara. Since 2016, he has performed extensively with pianist Priscilla Yuen across the United States and South America.

1996 – Recording with the Brass Band of Battle Creek (BBBC), Brassamatazz

1985-present – Numerous commercial recordings and soundtracks for accounts
such as PBS, NBC, HBO, and ESPN (all done in Rochester, NY)