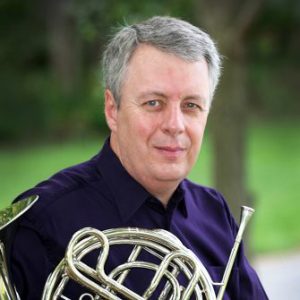 W. Peter Kurau, Professor of Horn, Director of the Eastman Horn Choir, and hornist with Eastman Brass, was appointed in 1995 to the full-time faculty at the Eastman School of Music, succeeding Verne Reynolds. He previously served on the faculties of the University of Missouri-Columbia, SUNY-Geneseo, Roberts Wesleyan College, Houghton College, and Nazareth College.

Active within the International Horn Society, having served on its Advisory Council for eight years and as Vice-President, Secretary-Treasurer, Pedagogy Editor and member of the Editorial Board for the Horn Call, he hosted the 29th Annual International Horn Workshop, held in 1997 at the Eastman School. He is honored and humbled to be the 2016 recipient of the I.H.S. Punto Award.

In 1991, he appeared as soloist in the first modern performance of the then recently discovered and reconstructed version of the Mozart Rondo, K.371 for horn and orchestra. He received his formal musical education at the Eastman School, the Guildhall School of Music and Drama, Royal College of Music, University of Connecticut, and Florida State University, where his principal teachers were Verne Reynolds, David Cripps, William Capps, and Horace Fitzpatrick (natural horn).