“SOMETHING MEANINGFUL, SOMETHING COMMUNAL”:
SELECTIONS FROM SPEECHES AND WRITINGS BY DOUGLAS LOWRY

During his six years as Dean of The Eastman School of Music, Douglas Lowry gave many speeches and addresses, and wrote numerous articles and letters. All display proof of Lowry’s engagement in what he called “the robust theatre of ideas, the mosh pit of the human condition.” He displayed a wide-ranging intellect, a fluent way with words, a remarkable range of artistic and scientific references, and a fine sense of humor.

As we sit in front of the computer screen, we are visiting the most-visited theatrical stage. We need to lead this exploration, define its path of events, revive live music.

In the coming years, Eastman will take a hard look at the breathtaking changes in the way that music is experienced and consumed, and examine the emerging relationship between music and other art forms, particularly new media.

However, we will not waver from the Eastman hallmark: the very highest standards of artistry and scholarship. On these and more, Eastman will continue to play an international leadership role. I am thrilled to be part of that future.

From Eastman Notes, Summer 2007, upon his appointment as Dean of the Eastman School of Music 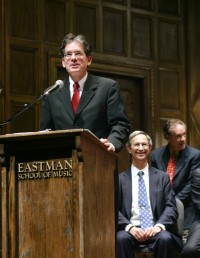 I believe that reports of the demise of serious music are exaggerated. But we must create new engagement possibilities for music with those legions of intelligent, curious, informed people that are missing out, or going elsewhere for their aesthetic inspiration. We must figure out a way to captivate them in a way that is steeped in the fundamental essence of great music, yet urgently means something for future generations. To be blunt, I think it’s this urgency that has been lost. Something tells me that the ‘serious music’ profession has been a little asleep at the wheel. But another way, we have not been courageous and passionate public advocates for our art form.

Writ large on our façade, George Eastman’s muse looks over us: For the enrichment of community life. We are the alchemists who must convert music into something meaningful, something communal. I would argue that if we keep connected to the soul of civilization, the audience will take care of itself.

And to that full experience must we be truthful. As ephemeral as the dream may be, as realities curve the pattern, we must believe in it.

The spirit and collaboration will be central to the survival and splendor of music’s next great era, as music tumbles about in the combustion chamber of the real world, the robust theatre of ideas; not just musical ideas inspired by somebody else’s musical ideas, but the mosh pit of literature, visual art, drama; of the sciences, of social friction, of politics; in short, in the mosh pit of the human condition – the human condition with which you must and will engage. Trust me, it needs you. …

To be sure, walking into that minefield of human paradoxes requires a good dose of courage, and perhaps a hint of giving up something of the context within which we’ve been trained … Yet the process is liberating, that process of yielding a bit of your own self-importance. Maybe a lot.

In finding our musical voice we discover our ancestral musical undercurrent. But we must also, to become authentic, mesh with the diverse human elements that enrich our collective voice. Somewhere in there, we’ll be able to say we discovered our own musical mythology.

For us, here and now, our urgent task is to create … more … community. This is where I believe we’ve sometimes failed. Although we as musicians want community, some of us have lost the notion of what it takes to create one, or have felt mistakenly that just generating an audience constitutes creating a community. But that is such a dim view of the audience. It diminishes their purpose to simply a bunch of people gathered to pay us attention; it is not enough. The audience IS our community, like the community many of you graduates have developed over the last few years. These are people with whom you have laughed, cried, became strong friends, and shared perhaps one of the most personal experiences ever invented: you’ve made music together. Because music is such a powerful conduit through which to create an authentic communal bond.

From Dean Lowry’s commencement address, May 2012

Please understand that time is precious. I urge you to not take anything for granted. To raise your awareness to the height of revelation, for every moment in your life will be rendered much richer if the light of your attention burns brighter.

From Dean Lowry’s commencement address, May 2012

Schools of music have complicated missions but one simple purpose: to educate talented young performers, scholars, composers, and teachers in the critical functions of their chosen professions. We have a responsibility to furnish experiences that not only teach the art, but also bear some resemblance to the world that our students will inherit. This includes preparing them in the musical rudiments and the real-life challenge of inspiring and building an audience, knowing important aspects of the business, and becoming entrepreneurs …

The attentive musician listens to the pulse of the times–not to curry favor with current stylistic trends, but to form an understanding of how music’s presentation and enjoyment have evolved. To assume that the musical experience of 1813–how it looked, felt, dressed; where it took place–would and should remain the same in 2013 ignores some basic laws of nature.