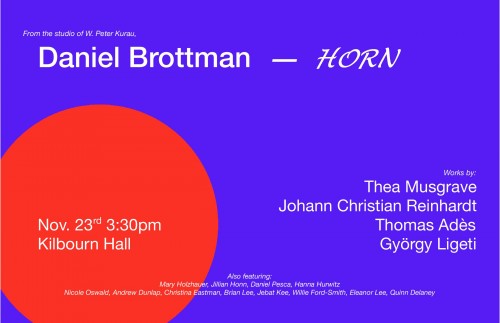 Daniel Brottman will presenting his BM/PC recital on Saturday, November 23, 2013 at 3:30PM in Kilbourn Hall. Program information can be found here. On his recital repertoire, Daniel says:

This work was written for Barry Tuckwell and Margaret Kitchin in 1967, and I find the music’s strong character, as well as juxtapositions between aggressive and sensitive moods, to fit Tuckwell’s playing style. I enjoy playing the piece for its’ expressive opportunities, and the close interplay between the two instruments. Musgrave, in her program note, writes:

“…a method of writing has evolved to give the players a certain degree of rhythmical freedom. Passages of great rhythmic complexity thus become possible using relatively simple means. The work is short and dramatic. There are several strongly contrasted interlinking sections, unified by a chordal idea heard at the outset.”

This concerto is one of 18 horn concerti housed at the Lund Library University in Sweden. As many of the composers in the collection had connections with Dresden, it is believed this concerto may have been written for Anton Hampel (1710 – 1771), the virtuoso 2nd horn player in the Dresden Court Orchestra. The identity of the composer is also an educated guess, as the manuscript provides only the last name.

Learning to play this work on the natural horn has been an exciting and rewarding challenge, and informative especially as to how the natural horn relates to other works on my program. My studies in period performance are only at their onset, and I look forward to continuing to exploring this repertoire.

I believe the title of this work is a play on two titles often used by the Italian Baroque composer Arcangelo Corelli: “Sonata da Camera” (Chamber Sonata) and “Sonata da Chiesa” (Church Sonata). “Sonata da Caccia” then, is “Hunting Sonata” or “Chasing Sonata,” a reference to the presence of a decidedly notbaroque instrument in this trio, the modern horn. Adès plays with this space between the baroque and the contemporary in highly creative ways throughout the work, including a sort of polyrhthmic Gavotte for the finale. Adès has to say of the work:

“The combination of oboe, horn and harpsichord was devised by Debussy for the fourth of his instrumental sonatas, which death prevented him from composing. This piece could be imagined as a ‘homage’ to Debussy and Couperin, in the manner of the latter’s L’Apothéose de Corelli or L’Apothéose de Lulli.”

It has been my dream to perform this piece for at least four years, far before I knew where it lay in regards to Ligeti’s own compositions and what it meant for other composers before and after him. I was initially drawn to the work because I find exciting, I find it to be expressive, and I love the way it sounds. Certainly also, I love a challenge!

This work is marked as an homage to Johannes Brahms, who wrote a very well known work for this same instrumentation and of the same title. The Trio was an important turning point in Ligeti’s composition that opened up what he called his “Third Way,” neither modern nor postmodern. Keeping this in mind makes Ligeti’s choices in the trio clearer to me.

The first movement, while extremely rhythmically precise, is also quite lyric. The following movements make use of the “out of tune” natural harmonics on the horn, recalling both the natural horn Brahms’ trio was written for, as well as opening the door for a new and surprisingly idiomatic style of writing for the instrument. The pitch material is distinctly Ligeti’s own voice, whether it comes from tonal origins, the 12-tone system, or yet other devices or intuitions.