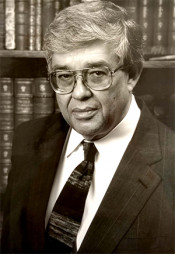 The American pianist, musicologist, and music educator Robert Freeman has led several of America’s finest music schools – including the Eastman School of Music, where he served as director for more than two decades.

In his youth, Freeman studied oboe with Fernand Gillet, and piano with Gregory Tucker, Artur Balsam, and Rudolf Serkin. He earned a Bachelor of Music degree with highest honors from Harvard University and a diploma in piano performance from the Longy School of Music. In 1957-58 he held one of Harvard’s Sheldon Travelling Fellowships. At Princeton University, he was awarded an MFA and a PhD in musicology. A Fulbright Scholarship enabled him to pursue further studies in Vienna in 1960-1962. He was awarded a Martha Baird Rockefeller Foundation Award in 1962. In 1963 Freeman joined the Princeton music faculty, leaving in 1968 to join the music faculty of the Massachusetts Institute of Technology.

In 1972 he was named director of the Eastman School of Music, a position he held until 1996. He had a longtime connection to the school and to Rochester: his parents were Eastman graduates, and his paternal grandfather had been the first trumpet teacher at the school.  Freeman’s father was a double bass player, and ultimately principal bass, in the Boston Symphony Orchestra.

Robert Freeman’s 24 years at Eastman were a time of great growth for the school. As director, Freeman oversaw a major expansion in the campus, including a new Student Living Center and a new building for the Sibley Music Library. He appointed many distinguished artists and scholars to the Eastman faculty, while pointing the school’s curriculum towards the realities of the musical world. He helped to increase national and international exposure for such Eastman performing groups as the Eastman Wind Ensemble, Jazz Ensemble, and Philharmonia. An enthusiastic and opinionated Rochesterian, he was a leader of the development of the downtown Cultural District, and an articulate spokesperson on the subject of Eastman’s responsibility to the Rochester community.

One of Freeman’s most successful and enduring initiatives involved commissioning faculty member Joseph Schwantner, a Pulitzer Prize winner, to compose a new work for the Eastman Philharmonia that would include a narrator role intended for Willie Stargell, the beloved and iconic first baseman of the Pittsburgh Pirates. New Morning for the World incorporated text from the writings of Dr. Martin Luther King, Jr., drawing attention to one of the most critical social issues of the time, the civil rights movement. The work’s premiere at the Kennedy Center in 1983 and its subsequent performances and recordings were tremendous musical experiences for our students and brought wide acclaim and visibility to the Eastman School of Music.

From 1996 through 1999, Freeman served as president of the New England Conservatory, then as dean of the College of Fine Arts at The University of Texas at Austin till 2006. He is now the Susan Menefee Ragan Regents Professor of Fine Arts at the UTA, where he teaches courses in musicology.

A Steinway artist, Freeman has performed in concerts and recitals throughout North America and Europe, and has made several recordings, mainly with colleagues from Eastman and the University of Texas. As a musicologist, his publications have focused on 18th-century music history and on the history and future of musical education. Many of Robert Freeman’s reflections on his experiences as a musician and music educator are included in his recent book The Crisis of Classical Music in America: Lessons from a Life in the Education of Musicians (2014). 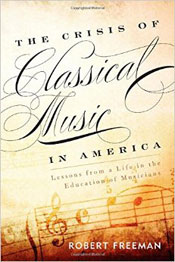 Signed copies of Robert Freeman’s recent book The Crisis of Classical Music in America are available for purchase in the Eastman School of Music bookstore.