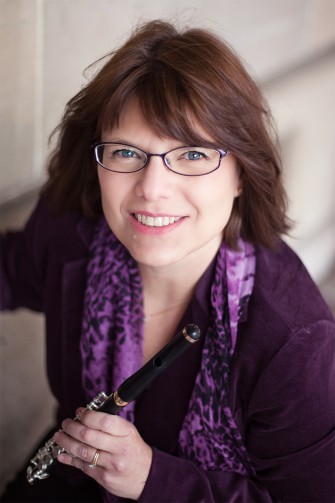 Currently, Ms. Harrow is Solo Flute and Piccolo of the Lake Placid Sinfonietta, the Orchestra of the Adirondacks, where she is a frequent soloist. Before coming to Eastman, Ms. Harrow was Principal Flute with the Florida West Coast Symphony and a founding member of the Florida Wind Quintet. Additionally, she has been Second Flute/Piccolo with the Savannah Symphony and a member of the Rochester Philharmonic Orchestra. Recently, Ms. Harrow has performed with the Buffalo Philharmonic, the Chautauqua Symphony, and the Qingdao Symphony Orchestras. She was named a member of the artist faculty of the MasterWorks Festival in Winona Lake, Indiana in 2014.

Ms. Harrow earned her BM, Performer’s Certificate, and MM at Eastman, where she has been a faculty member since 1995. Her teachers include Bonita Boyd and Thomas Nyfenger.

Ms. Harrow may be heard on Albany Record’s ‘New Music Mix: Composers and Musicians from Eastman and Freiburg’, recorded in Germany. She is piccolo soloist on the Grammy Award-winning recording of Barber’s Anthony and Cleopatra, recorded at the Spoleto Festival in Italy. She has also recorded with the Eastman Wind Ensemble, the Rochester Philharmonic Orchestra and the Lake Placid Sinfonietta.