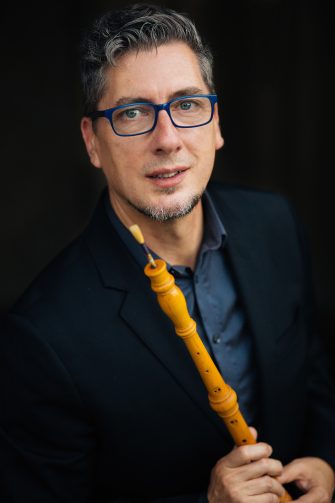 Geoffrey Burgess is known internationally as a performer of historical oboes. For twenty years a member of the Paris-based opera company Les Arts Florissants, Geoffrey has also given concerts with leading early music groups in throughout Europe, Australasia and the US. Geoffrey’s experience ranges from late 17th-century French repertoire to premières of new works composed for “Duo d’amore” with harpsichordist Elaine Funaro. Beginning studies in Sydney, he specialized in baroque music in The Hague, followed by a doctoral degree in musicology at Cornell University. Dr Burgess has taught on the faculties of Stony Brook, Duke and Columbia Universities and currently teaches at the Eastman School of Music. His book, The Oboe (Yale University Press) written in collaboration with the late Bruce Haynes, was voted an outstanding achievement by the American Music Instrument Society. Geoffrey continues to be sought after as a refined interpreter of baroque music, and has served as principal oboe with the Washington Bach Consort, and collaborated with leading artists such as Elizabeth Futral, Julianne Baird. He has recorded music by members of the Bach family with a sequel comprising concertos and chamber music.