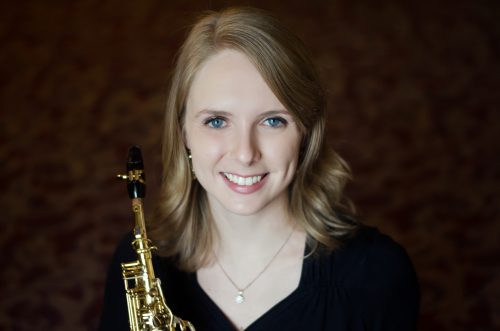 A native of Myrtle Beach, SC, Anne Kunkle earned her Bachelor of Music degree with High Distinction as a double major in Saxophone Performance and Music Education from the Eastman School of Music, where she was a student of Dr. Chien-Kwan Lin. In the Spring of 2019, Anne earned her Master of Music degree from the University of Illinois at Urbana-Champaign as a student of Professor Debra Richtmeyer.

Anne has presented a recital at the Chicago Cultural Center as the First Prize and Jerome and Elaine Nerenberg Foundation Scholarship recipient of the 2018 Musician’s Club of Women Scholarship auditions. She also won the First Prize at the 2016 Empire State Collegiate Instrumental Competition, organized by the New York State Music Teachers Association.

As soprano player in the Khroma Saxophone Quartet, Anne earned the Silver Medal at the 2019 Fischoff Chamber Music Competition in the Senior Winds Division. The quartet was also selected to perform a recital at the 2018 Midwest Band Conference in Chicago, IL. In addition to chamber music, Anne also possesses a broad range of performance experience, having performed with a wide variety of large ensembles such as the Eastman Wind Ensemble, Musica Nova, Eastman Philharmonia, as well as the Illinois Wind Symphony which performed at Lincoln Center in 2018. Anne has performed with the Singapore Symphony Orchestra and has recorded Shostakovich’s Suite for Jazz Orchestra No. 1 and Suite of Variety Orchestra No. 1, as well as Youman’s Tahiti Trot (Tea for Two) with the ensemble.

As a member of the innovative and creative ensemble, the Eastman Saxophone Project (ESP), Anne has performed at the prestigious Kennedy Center for the Performing Arts in Washington, D.C. In 2016, she traveled with ESP to China, where she performed at the National Center for the Performing Arts in Beijing, as well as concert venues in the cities of Jinan, Ningbo, and Shanghai. The group has performed her arrangements of Dmitri Shostakovich’s Jazz Suite No. 1 and Franz Liszt’s Hungarian Rhapsody No. 2.

Anne is pursuing a Doctor of Musical Arts degree in Saxophone Performance and Literature at the Eastman School of Music, where she serves as the ESP Assistant Director, teaches at the Eastman Community Music School, and is a mentor for the New Horizons Music program.