The Zimbabwean Marimba Ensemble, also known as Simba Marimba, is open to anyone regardless of experience. Students will learn the playing techniques and be introduced to the basic repertory of the Kwanongoma marimba, an instrument uniquely African and played in the Shona culture of Zimbabwe. 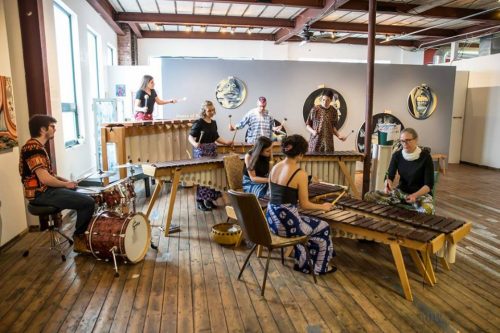 This instrument has only existed for about forty years, and during this time its popularity has grown tremendously. Today, Zimbabwe-style marimba bands can be heard not only in Zimbabwe and its neighboring countries, such as Botswana and South Africa, but also in the United Kingdom, Scandinavia, Australia, Canada and the United States. For an instrument with such a short history, it has certainly traveled far. The repertory for this group was taught to us from Simbarashe Kamuriwo, a Zimbabwean living in the Northeast.

Essential aspects of the music that will be learned and applied include the interlocking of different parts, traditional singing practices, rhythmic accompaniment, and the social and cultural context of the music. Students will also be guided to understand the music from the traditional Shona point of view as well as integrating it with their own musical understanding.

Designed in the 1960’s, the Kwanongoma marimba is so named because of its origins at Kwanongoma College in Bulawayo, Zimbabwe. It is a wooden instrument, sometimes made with a metal frame, with plastic tube resonators, and is played using rubber mallets. An ensemble is comprised of soprano instruments, tenor instruments, a baritone and a bass. The standard treble instruments (sopranos and tenors) usually have 17 keys—two octaves of a C major scale with an F sharp in each octave, which makes it possible to play in the key of G major as well.

Early teachers of the marimba were African musicians who became prolific composers and arrangers of the early repertoire. The marimba, as a result, played a central role in the definition and curation of the novel and modern national music. The versatility of the instrument and the music has also led to their adoption and adaptation by contemporary musicians in Africa, Asia, and the West. Repertory will be taught and performed without notation in keeping with the aural tradition of the music. Although participants will be assigned to certain sections based on their experience for the purpose of learning repertory, members of the ensemble are welcome to sit in on both sections for purposes of review or exposure to new repertory.

Day of the Week