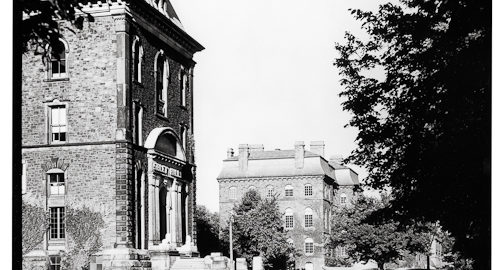 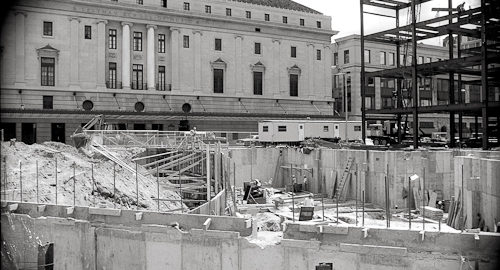 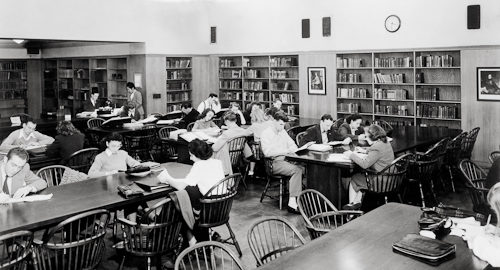 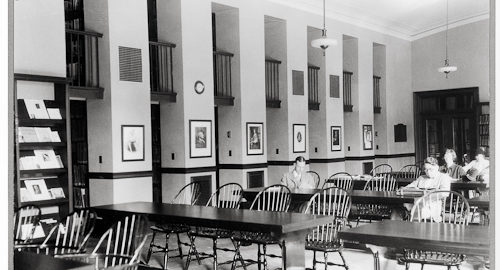 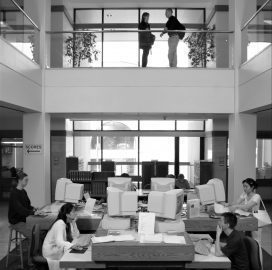 The Sibley Music Library of the Eastman School of Music is the largest music library affiliated with any college or university in the United States. With holdings of nearly three-quarters of a million items, the Library offers vast resources for performance and research.

The Sibley Music Library was founded in 1904 by Hiram Watson Sibley (1845-1932) as a music library “for the use of all music-lovers in Rochester.” Sibley’s father, Hiram Sibley (1807-1888) had made an enormous fortune in the 1850s and ’60s by consolidating a group of small telegraph companies to form Western Union Telegraph Company. Both father and son were generous supporters of higher education, and Hiram Watson Sibley’s new music library was housed in the University of Rochester’s Sibley Hall (funding for the building donated by the elder Sibley), where it fulfilled the dual purpose of a community music library as well as providing music materials within the University Library.

Barbara Duncan came to Eastman from the Boston Public Library, where she had been curator of the Allen B. Brown music collection since 1909. Her experience in collection building at BPL was invaluable as she directed the expansion of the Sibley collections. She inherited a collection of some 8,600 volumes; by the time she retired in 1947 the collection numbered nearly 55,000 volumes. Her tenure was marked by particularly active buying of antiquarian books and scores from Europe, thus providing the foundation of the Sibley Music Library’s internationally recognized Ruth T. Watanabe Special Collections. Duncan also presided over the construction in 1937 of the first building in the United States to be planned and built solely as a music library. What we know today as “Old Sibley Library” was then a spacious combination of four levels of closed stacks and two floors with reading rooms, seminar rooms, and offices.

If Duncan’s era was the great era of antiquarian purchasing, Ruth T. Watanabe’s era was the great era of focusing on current publications. Watanabe recalled at one point that Howard Hanson told her: “You will buy everything, I mean everything.” By Watanabe’s own admission it wasn’t quite everything, but it was impressive collection building, particularly of scores. By the end of her first fifteen years in 1962, the collection had more than doubled, comprising almost 120,000 volumes of books and scores. By the time she retired in 1984, Watanabe had more than doubled the book and score collections once again.

Success with collection building, of course, meant that the stacks began to fill up. By the early 1980s the situation had become critical. It was the great achievement of Mary Wallace Davidson to design the third-and current-home of the Sibley Music Library. Dedicated in 1989, the building provides some 45,000 sq. ft. of space on the second, third, and fourth floors of Eastman Place, a large, mixed-use building across Gibbs Street from the Eastman School.

The library’s collections grew considerably under the leadership of Daniel Zager, a librarian and musicologist who embodied the Eastman School’s ideals of musicianship, scholarship, and leadership. In collaboration with Eastman’s academic deans, he successfully advocated for substantial increases in funding for purchasing print and digital materials. With the support of more than $500,000 in grants from the National Endowment for the Humanities, more than 23,000 scores were digitized and made available to the musical world.  His well-reasoned and well-researched advocacy for building and maintaining a technological infrastructure has helped to make the treasures in Sibley Music Library accessible to a worldwide community of musicians and scholars.

In addition to serving the world-renowned Eastman School of Music, the Library serves the music-lovers of the greater Rochester area, thus continuing Hiram Watson Sibley’s original vision for the collection.