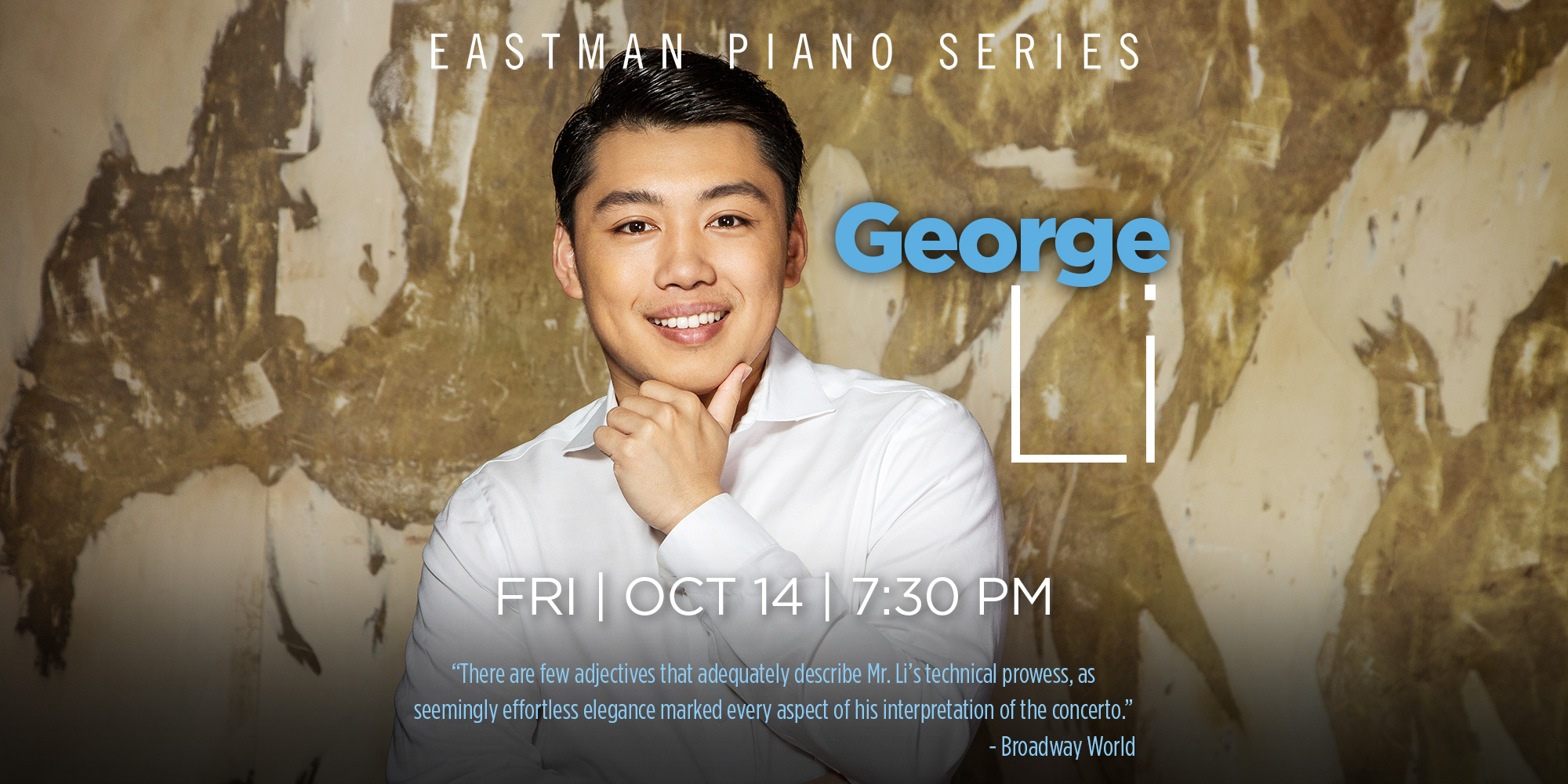 Looking ahead to Eastman School of Music’s October and November Eastman Presents concerts, we are pleased to present a wide range of events featuring internationally accomplished guest artists. These concerts will be held in Eastman’s magnificent concert venues: Kodak Hall, Kilbourn Hall, and Hatch Recital Hall.

Mike Stefiuk, Director of Concert Operations, shares, “Few things compare to the experience of attending a live-music performance and we’re excited to welcome audiences back to concerts in Eastman’s beautiful and historic venues.  I look forward to seeing new and familiar faces again at concerts throughout the entire 22-23 season.”

Tickets to all concerts are available at www.EastmanTheatre.org or by calling 585-274-3000. Patrons are encouraged to purchase as soon as available to secure the best seats for the most sought-after concerts and receive the highest level of savings.

A silver medalist at the 2015 International Tchaikovskv Competition, George Li has established a major international reputation with performances on the world’s most prestigious stages. In his return to Eastman, as a featured artist in our Piano Series, Li showcases works of Schumann,  Ravel, and the keyboard pyrotechnics of Stravinsky’s Petrushka.

Sponsored in part by Vincent and Christina Lenti.

Qwanqwa is a supergroup of musicians from some of the ensembles of Addis Ababa (the capital city of Ethiopia). Brought together by a shared passion for the power of Ethiopian music, Qwanqwa shines an experimentalism based in the virtuosity of rooted traditions. With swirling mesenko (one-stringed fiddle), punk krar solos (electric lyre), wah-wah-violin, bass krar boom, the unstoppable rhythm of heavy kebero (goat-skin drum) beats, and powerful traditional lead African diva vocals, Qwanqwa keeps the people wrapped in celebratory attention. This concert is part of our Barbara B. Smith World Music Series.

Join internationally acclaimed mezzo-soprano Anne Sofie von Otter, and one of today’s most notable and exciting keyboard artists, Kristian Bezuidenhout ‘01E, ‘04E (MM) for an enchanting evening of Lieder and piano pieces. “Von Otter has honed the art of singing to such a point that she is purely expressive, no matter what she’s singing,” raves the Washington Post.

The Ying Quartet occupies a position of unique prominence in the classical music world, combining communicative performances with a fearlessly imaginative view of chamber music in today’s world. As quartet-in-residence at the Eastman School of Music, the ensemble will perform three Eastman-Ranlet Series concerts during the season, this being the first, with subsequent performances on Sunday, January 29 and Sunday, March 26, both at 3:00 p.m. in Kilbourn Hall.

“A performer of near-superhuman technical prowess” (New York Times), pianist Marc-André Hamelin is known worldwide for his unrivaled blend of consummate musicianship and brilliant technique in the great works of the established repertoire, as well as for his intrepid exploration of the rarities of the 19th, 20th, and 21st centuries. He regularly performs around the globe with the leading orchestras and conductors of our time and gives recitals at major concert venues and festivals worldwide. The program includes a range of French compositions, including works by Dukas, Fauré, and an original composition by Hamelin.

For additional October and November Faculty Artist Series events and details, please refer to the press release and www.EastmanTheatre.org.