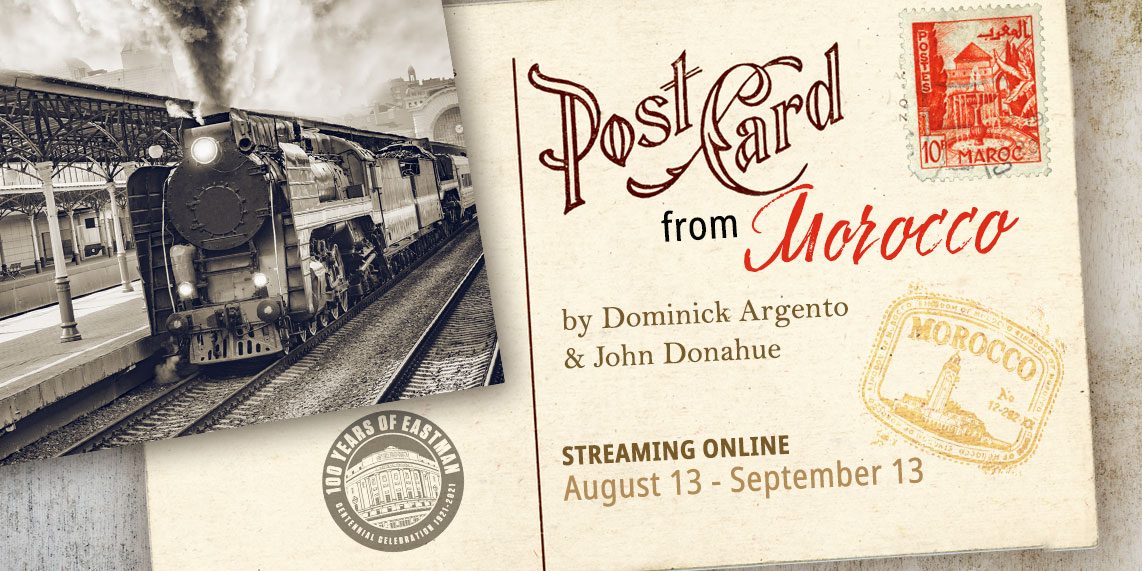 This innovative production will be designed, produced, and presented as a pre-recorded or live stream originating from Eastman Opera Theatre’s Scene Shop. As Eastman Opera Theatre plans productions during this unusual time and celebrates the 2021 Eastman School of Music Centennial, Postcard from Morocco works particularly well for a non-traditional production, because of the small number of singers and instrumentalists required, and the surreal plot about a group of strangers in a train station. Although they are together, each character lives in a separate reality as they protect and guard their possessions. Therefore, an element of social distancing is found in the story.

Postcard from Morocco “has no clearly discernible plot but makes its effects through a powerful series of images and inferences,” says Steven Daigle. “The opera highlights human cruelty, and the resulting armor we all put up. Questioning others’ motivations, these characters spend the entire opera suspicious of one another, guarding their possessions because their possessions define them and their existence.”

Produced in EOT’s scene shop, the production was conceptualized, filmed with ‘green screen’ techniques that combined the live performers recorded separately, then superimposed the video and audio tracks together to make an ensemble through film editing. With real furniture, props, and period costumes, the Integrated Media Designer Charles Murdock Lucas created a one-of-a-kind virtual world that allowed a 1930s Moroccan train station to morph into the fantasies in the minds of the seven characters.

Composer and librettist Dominick Argento ‘58E (1927-2019) was one of America’s leading composers and among the most frequently performed 20th century composers of opera. He composed more than a dozen operas, including The Boor (1957), The Masque of Angels (1963), Postcard From Morocco (1970), The Voyage of Edgar Allan Poe (1975), A Water Bird Talk (1981), Casanova’s Homecoming (1985), and The Aspen Papers (1988), which have been performed by the Dallas Opera (whose premiere performance of The Aspern Papers was telecast nationally in PBS’ series Great Performances), and others.

Several of Argento’s song cycles are contemporary classics, especially From the Diary of Virginia Woolf, which was awarded the Pulitzer Prize for Music in 1975. Argento’s symphonic works have been performed by many of America’s leading orchestras, and he wrote frequently for choruses, most notably the Te Deum, which was recorded for Virgin Classics and subsequently nominated for a Grammy Award.

Among Dominick Argento;s  many honors were the OPERA America Award for Achievement, Chorus America’s Founder’s Award, the Peabody Medal, and several honorary doctorates. Since 1958, Argento taught at the University of Minnesota, and after his retirement was a Professor Emeritus of Composition. The Eastman School of Music honored Dominick Argento with its Alumni Achievement Award in 1979.