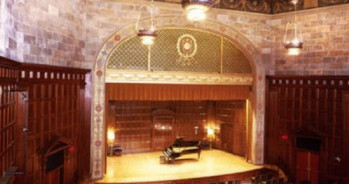 The Faculty Artist Series presents Eastman Virtuosi on Saturday, January 25, at 7:30 p.m. in Kilbourn Hall at the Eastman School of Music. The concert will feature performances by Professor of Guitar, Nicholas Goluses; guitar, Professor of Voice, Anthony Dean Griffey; tenor, and Associate Professor of Piano, Andrew Harley; piano. The program will include Fantasia for Solo Guitar by Bill Dobbins, Professor of Jazz Studies and Contemporary Media, written for and performed by Nicholas Goluses; Gerald Finzi’s Let Us Garlands Bring, performed by Anthony Griffey and Andrew Harley; and the Eastman Collegium Viol Consort, Cristel Thielmann, director, in selections by Gibbons, Byrd, Tomkins, Leclair, and Vivaldi.

Nicholas Goluses is Professor of Guitar, founder and director of the guitar programs at the Eastman School of Music, where he is the recipient of the Eisenhart Award for Excellence in Teaching. Before coming to Eastman he was the first Andrés Segovia Professor at Manhattan School of Music where he received the Doctor of Musical Arts degree, and was the recipient of the Pablo Casals Award and the Faculty Award of Distinguished Merit. His students have won major competitions throughout the world, and he is in great demand for master classes at leading institutions throughout the world. Nicholas Goluses’s concert tours as soloist, with orchestra, and as chamber musician have taken him across North America, South America, Europe, Australia, and the Far East to critical acclaim.

Hailed by the Boston Globe as “an altogether exceptional artist” who has “voice, technique, musicianship, diction, and poetry in his soul,” four-time Grammy Award-winning American tenor and pedagogue Anthony Dean Griffey has captured critical and popular acclaim on opera, concert and recital stages around the world. Equally sought after as a teacher and adjudicator, Griffey is a perennial judge of the Metropolitan Opera National Council auditions and a regular presence at masterclasses and workshops all over the world. Since 2015 Griffey has served as Professor of Voice at the Eastman School of Music. Performance highlights of his 2019/20 season include Janáček’s Glagolitic Mass with the Elbphilharmonie in Hamburg conducted by Alan Gilbert, Beethoven’s Ninth Symphony with the Seattle Symphony, Mahler’s Das Lied von der Erde with the Orpheus Chamber Orchestra and recitals at the Morgan Library and Wingate University.

English pianist Andrew Harley enjoys an internationally recognized performing and teaching career. Specializing in instrumental chamber music and song literature, he has been heard in live radio and television broadcasts, on numerous recordings, as well as at venues such as Carnegie Hall, Wigmore Hall, Purcell Room, Kennedy Center, Library of Congress, and the Supreme Court of the United States. Dr. Harley began his early musical education at the renowned Chetham’s School of Music, continuing his studies at Oxford University, the Royal Northern College of Music, and the University of Southern California. Since immigrating to the United States, Dr. Harley has held faculty positions at The Juilliard School, the University of Southern California, and the University of North Carolina, before coming to the Eastman School of Music in 2019. As a guest artist, he has taught and given master classes at The New England Conservatory, Indiana University Bloomington, the Royal Northern College of Music, Chapman University, and the Folkwang University of the Arts in Essen, Germany, where he served as Visiting Guest Faculty in Accompanying.

Tickets for Eastman’s Faculty Artist Series are $10 for the general public and free to current Season Subscribers and UR ID holders. Tickets can be purchased at the Eastman Theatre Box Office, 433  Eastman Main Street, 9:30AM – 2:30PM., Monday-Friday; by phone (585) 274-3000; or online at http://eastmantheatre.org