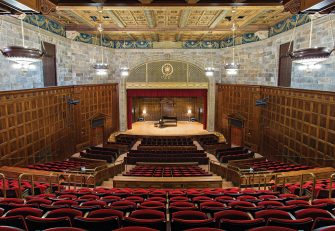 Professor of oboe, Richard Killmer was principal oboist of the St. Paul Chamber Orchestra for eleven years. Killmer was also a member the faculty of the Yale School of Music, for six years, as Visiting Professor of Oboe. He began his early studies on oboe with George Webber and Richard Henderson, with whom he played in the El Paso Symphony.

Professor of Bassoon George Sakakeeny (ESM BM ’78) has appeared as a soloist with orchestras throughout North and South America, Europe, and the far East, including engagements in Vienna at the historic Musikverein, at Severance Hall with members of the Cleveland Orchestra, and a nationally televised concert in Japan under the baton of Seiji Ozawa.

Professor of Piano Marina Lomazov has established herself as one of the most passionate and charismatic performers on the concert scene today, having given performances throughout North America, South America, China, South Korea, England, France, Germany, Italy, Spain, Austria, Bulgaria, Ukraine, Russia, Japan and in nearly all of the fifty states in the U.S.

Professor of Violin Renée Jolles enjoys an eclectic career as soloist and chamber artist specializing in a wide variety of styles from the Baroque to the contemporary. Hailed as a “real star,” by The New York Times for her New York Concerto debut in Alice Tully Hall, she has premiered hundreds of works, including the American premiere of Schnittke’s Violin Concerto No. 2.

Professor of Viola George Taylor is a former member of the Ciompi Quartet of Duke University, a position he held from 1979 through 1986. A dedicated, sought-after and beloved teacher, he has served on the artist faculties of The Castleman Quartet Program, Le Dormaine Forget, the Chautauqua Institution, Musicorda, The Encore School for Strings, the Meadowmount School, the Manchester Music Festival, and the Elan International Music Festival, among others.

Associate Professor of Cello Guy Johnston is one of the most exciting and versatile British cellists of his generation. Johnston was born into a musical family and joined his brothers in the world-renowned choir of King’s College, Cambridge, where he recorded the famous carol, “Once in Royal David’s City” under Stephen Cleobury. He went on to achieve important early successes through the BBC Young Musician of the Year title, the Guilhemina Suggia Gift, the Shell London Symphony Orchestra Gerald MacDonald Award, and receiving a Classical Brit Award at the Royal Albert Hall.

Tickets for Eastman’s Faculty Artist Series are $10 for the general public and free to current Season Subscribers and UR ID holders. Tickets can be purchased at the Eastman Theatre Box Office, 26 Gibbs Street, 10 a.m. – 3 p.m., Monday-Friday; by phone (585) 274-3000; or online at http://eastmantheatre.org