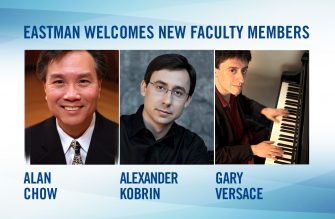 The University of Rochester’s Eastman School of Music has announced the appointments of Alexander Kobrin and Alan Chow as faculty members in the Piano Department, and of Gary Versace in the Jazz Studies and Contemporary Media Department.

“I am thrilled that Eastman’s legacy among pianists will be enhanced in the years to come by the appointment of these remarkable artists and teachers,” said Jamal Rossi, the Joan and Martin Messinger Dean of the Eastman School of Music. “The future of piano at Eastman is very bright.”

Kobrin has won top prizes in international piano competitions, including the Nancy Lee and Perry R. Bass Gold Medal at the 2005 Van Cliburn International Piano Competition, First Prize in the Busoni and Scottish competitions, and Top Prize at the Hamamatsu competition. Chow won First Prize at the Concert  Artists Guild International Competition and the Silver Medal and Audience Favorite Prize at the Gina Bachauer International Piano Competition, and is a member of the artist faculty at Northwestern University’s Bienen School of Music. Versace, an Eastman alumnus, is a pianist, organist, and accordionist who is an in-demand jazz soloist, band musician, and clinician. They will begin teaching at Eastman during the 2017-2018 academic year.

“I am honored to be given the opportunity to join the family of Eastman School of Music,” said Kobrin.  “I am looking forward to the inspiring journey alongside the stellar faculty and devoted students and to contributing to the best of my ability to the school and community of Rochester.”

Kobrin’s recitals and performances have been praised for their brilliant technique, musicality, and emotional engagement with the audience. He has appeared with many of the world’s great orchestras, including the New York, Tokyo, Warsaw, Royal Liverpool, and Moscow Philharmonics; the Dallas, Birmingham, Swedish Radio, Berliner, and BBC Symphonies; and the Russian National Orchestra, British Chamber Orchestra, Orchestra Verdi, Orchestre de las Suisse Romande, and Chicago Sinfonietta.

Kobrin has released recordings on the Harmonia Mundi, Quartz, and Centaur labels. His recording of Robert Schumann’s Carnaval, Waldszenen, and Arabesque was named a Top 5 Album of the year by Fanfare magazine in 2015.  Gramophone praised his performance of Rachmaninoff’s Second Sonata on the Cliburn Competition disc, noting “Kobrin achieves a hypnotic sense of the music’s dark necromancy.” He also has recorded three volumes of Chopin works and a Haydn CD.

In addition to his acclaimed performances, Kobrin has served on the faculties of the Gnessin’s Academy of Music and New York University’s Steinhardt School and currently holds the L. Rexford Whiddon Distinguished Chair in Piano at the Schwob School of Music at Columbus State University in Georgia. He has given master classes in Europe and Asia and been a jury member for many international piano competitions, including the Busoni, Blüthner, Neuhaus and the “Prix Animato.”

Said Chow, “Having long admired the performance and academic traditions at the Eastman School of Music, I am very excited to be invited to join this esteemed faculty. What impresses me as much as the superlative excellence that defines the School is this equally strong sense of community — and I am very much looking forward to being a part of this next fall!”

Chow’s awards also include First Prize in the UCLA and Palm Beach Invitational International piano competitions, and he was a prizewinner in the William Kapell International Piano Competition.

A Steinway Artist, Chow has performed to critical acclaim in recital and in concert in such major venues as New York’s Lincoln Center and Merkin Hall and Chicago’s Symphony Center and Ravinia and with orchestras in the United States and Asia, included concerto performances with the National, Pan Asian, Utah, Oakland, Kansas City, and Omaha Symphonies and the Hong Kong, Shanghai, and Tulsa Philharmonics. As a chamber musician, he has collaborated with the America, Pacifica, and Miami String quartets and been a guest artist at numerous festivals. Chow regularly tours Asia with performances in Japan, Hong Kong, Taiwan, Singapore, and China, where he also presented master classes and lectures at major conservatories. In addition, he appears in recital in the Cheng-Chow Trio with pianists Angela Cheng and his twin brother Alvin.

“The appointment of Alan Chow and Alexander Kobrin to the Piano Faculty insures that the highest possible standards of piano performance and teaching will continue to enrich the Eastman School of Music,” said Piano Department Chair Douglas Humpherys. “The Piano Department is indeed fortunate to welcome two such distinctive colleagues as we move forward, treasuring the great traditions of the pianistic art while embracing new musical adventures in the future.”

Said Versace, “I’m honored to be joining the Eastman jazz faculty. The chance to work alongside such high caliber artist teachers is both humbling and exciting, as is the opportunity to interact with a curious and amazingly talented student body. I look forward to becoming a part of the Rochester jazz community and appreciate the warmth extended to me by new and old friends alike.”

Versace, who received his master’s degree in music performance at the Eastman School of Music, is based in New York City and is one of the busiest and most versatile musicians on the international jazz scene. He is often featured in bands led by musicians such as John Scofield, John Abercrombie, Al Foster, Regina Carter, Maria Schneider, Madeleine Peyroux, John Hollenbeck, and many others. He twice was a guest on NPR’s Piano Jazz with Marian McPartland, who described him as “endlessly inventive” and having “an extraordinary talent.”

Named a “Rising Star” on DownBeat Critics Polls in 2009 and 2010 and winner of the Jazz Journalists’ Association’s Best Organist award in 2012, Versace has released several CDs under his own name on the SteepleChase and Criss Cross labels and has appeared as a guest on almost 50 more. He is the pianist on Ralph Alessi’s CD Quiver, which received 4.5 stars in DownBeat; as accordionist on Maria Schneider’s Grammy-winning The Thompson Fields; as Hammond organist on Ellery Eskelin’s Trip Willisau: Live and Rich Perry’s Organique; and on all three instruments on Kurt Elling’s Passion World.

Versace taught at the University of Oregon as a tenured associate professor in the jazz studies department for eight years. He remains active as a clinician and guest soloist around the world.

“It’s an honor and pleasure to welcome Gary Versace to the JCM family,” said Jeff Campbell, Chair of the Jazz Studies and Contemporary Media Department. “He brings an amazing resume of performing experience with a who’s who list of top-flight jazz musicians. He also is an accomplished teacher and our students are very excited to work with Gary.”