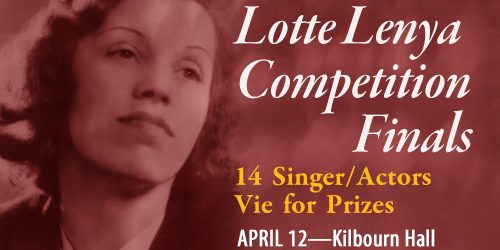 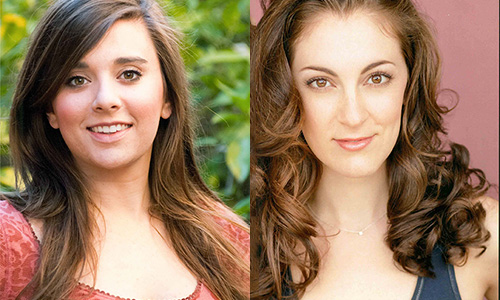 Two Eastman School of Music graduates, Natalie Ballenger and Diana Rose Becker, are among the 14 singer-actors in the finals of the 2014 Lotte Lenya Competition, which will be held on Saturday, April 12, in Eastman’s Kilbourn Hall.

They will compete for top prizes of $15,000, $10,000, and $7,500 in front of judges Rob Berman, a Broadway conductor and music director of Encores!; two-time Tony Award winner Judy Kaye; and James Robinson, artistic director of the Opera Theatre of Saint Louis.

Held annually by the Kurt Weill Foundation for Music, the Lotte Lenya Competition is an international theater singing contest that recognizes talented young singer-actors, ages 19 to 32, who are dramatically and musically convincing in a wide range of repertoire. It was founded in 1998 by foundation President Kim H. Kowalke, who is the Richard L. Turner Professor in Humanities at the University of Rochester and professor of musicology at the Eastman School, to honor Lenya, a singer and actress and the wife of composer Weill.

The final round starts at 11 a.m. on April 12 and runs until 3:30 p.m. Each contestant will perform a program consisting of an aria from the opera or operetta repertoire; two songs from the American musical theater repertoire; and a theatrical selection by Kurt Weill. At 8 p.m. that evening, each finalist will perform one or two selections from their program, after which the winners will be announced.  Both events are free and open to the public.

Ballenger, who is based in New York City, received her Bachelor of Music degree at Eastman in 2011. Her roles have included Josephine in HMS Pinafore; Susie Trevor in Lady Be Good, Sarah Brown in Guys and Dolls, Princess Diana in Jubilee, June in Gypsy, Evelyn in A Connecticut Yankee, and Lori Aschenbrenner in Miss Springtime.

Becker, of Northport, N.Y., received her Bachelor of Music degree at Eastman in 2007. She has performed in regional theater productions in such lead female roles as Eliza Doolittle in My Fair Lady, Laury Williams in Oklahoma, and Mary Hatch in A Wonderful Life; in New York as April in Company; and in an international tour as Maria in West Side Story.

In the last 15 years, the Kurt Weill Foundation has awarded more than a half-million dollars in prize money to Lenya Competition participants. Previous winners enjoy successful stage, concert, and recording careers around the globe.

A short documentary titled Singing the Story: The Lotte Lenya Competition will air on WXXI-TV  a week before the competition, at 6 p.m. on Saturday, April 5. The documentary uses live footage and interviews to trace the journey of the competitors, on stage and off, in the 2013 competition.