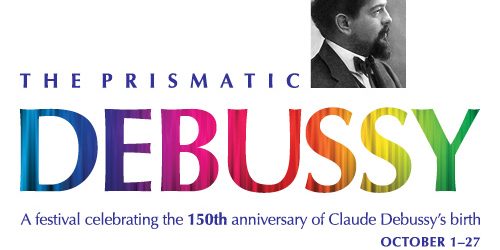 The 150th anniversary of the birth of Claude Debussy has already been celebrated this year in major music centers on both sides of the Atlantic: Brussels, Paris, Montreal, and London. This fall in Rochester, audiences can look forward to enjoying “the kaleidoscopic work of Debussy, one of the most innovative composers who ever lived,” said Marie Rolf, Associate Dean of Graduate Studies at the Eastman School of Music and an internationally known expert on the French composer.

A multifaceted festival, titled “The Prismatic Debussy,” will be held at the University of Rochester’s Eastman School throughout the month of October. “Faculty and students from the entire School will be joined by guest artists and scholars to collaborate in what promises to be an immensely rich musical experience,” said Rolf, who is also the festival’s Artistic Director. From an exhibition of original Debussy manuscripts in the School’s Sibley Music Library to a new spin on Debussy’s opera Pelléas et Mélisande, the celebration features a multitude of concerts and presentations — including premieres of early works and new arrangements of beloved standards — that explore the wide range of Debussy’s music.  All events are free and open to the public.

The festival’s opening event is “Extravagant Debussy,” a gala concert at 8 p.m. on Saturday, Oct. 13, in Kodak Hall at Eastman Theatre. The Eastman Philharmonia, Eastman School Symphony Orchestra, Eastman Wind Ensemble, and Eastman Chorale will perform several works, including the composer’s early orchestral suite Printemps and the last two acts of his seldom-heard theater piece Le Martyre de saint Sébastien (The Martyrdom of Saint Sebastian). Rolf will set the stage for the concert with lavish video projections, fascinating anecdotes, and excerpts from Debussy’s own writings.

Eastman’s contemporary ensemble Musica Nova performs “Inspirational Debussy” at 8 p.m. on Wednesday, Oct. 17, in Kodak Hall. The concert couples music by Pierre Boulez, one of the many composers influenced by Debussy, with world premieres of four new works by Eastman composers that were inspired by Debussy’s piano prelude “Des pas sur la neige” (“Footprints in the Snow”).

Then, at 7 p.m. and again at 9 p.m. on Saturday, Oct. 20, in Hatch Recital Hall, several Eastman chamber groups perform “Intimate Debussy,” a PRISM concert in which transcriptions of Debussy’s works are presented in uninterrupted succession from different locations around the venue.

Panels from famed comic-book artist P. Craig Russell’s treatment of Pelléas et Mélisande will accompany a freshly reworked rendition of Debussy’s operatic masterpiece at 8 p.m. on Friday, Oct. 26, in Kodak Hall. Titled “Pelléas Redux,” the performance replaces the singers and symphony orchestra with a chamber ensemble composed of Eastman faculty, alumni, and friends. Russell, who has based several of his comic books on famous operas, will talk about his work at 7 p.m. on Thursday, Oct. 25, at the Memorial Art Gallery. (“Comic Book Debussy”)

The festival draws to a close on Saturday, Oct. 27, with a day-long session on “Debussy Premieres” that combines scholarship and performance. In the morning, a panel of international scholars will offer insights on five newly discovered and reconstructed songs by Debussy. Noted operatic soprano Elizabeth Calleo and pianist Russell Miller will present the North American premiere of four songs and the world public premiere of the fifth. The afternoon session will link, via Internet2, faculty and students from the Eastman School of Music, Calleo, and participants from London’s Royal College of Music for a master class that will focus on Debussy’s early songs.

For the duration of the festival from Oct. 1 through 27, the School’s Sibley Music Library — the largest academic music library in North America — will hold an exhibition of “Debussy Treasures.” Visitors will be able to see original Debussy manuscripts and other rare materials, including Debussy’s complete working draft of his orchestral La Mer and an arrangement of “Minstrels” for violin and piano that the composer made for Arthur Hartmann, who later taught at Eastman in the early 1920s.

More information about “The Prismatic Debussy” festival can be found online at https://www.esm.rochester.edu/debussy/ .

Note to Editors: Below is the list of “The Prismatic Debussy” festival events; these were included in the complete calendar listings for Eastman School of Music Fall 2012 events that were sent out August 16. Please note these updates, marked in red below: the Oct. 17 “Inspirational Debussy” concert has a new location, Kodak Hall at Eastman Theatre; and the Oct. 20 “Intimate Debussy” now has 2 performances in Hatch Recital Hall.

Debussy Treasures. An exhibit of Debussy manuscripts, including his complete working draft of La Mer and his arrangement of “Minstrels” for violin and piano for Arthur Hartmann

Sibley Music Library at the Eastman School of Music