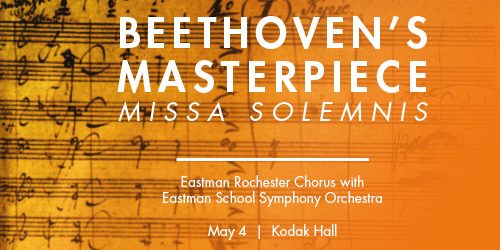 Missa Solemnis, Beethoven’s inspiring and profound work for vocal soloists, chorus, and large orchestra, will be presented at 8 p.m. Friday, May 4 , in Kodak Hall at Eastman Theatre.

“From the heart … may it go to the heart!” was the wish Beethoven inscribed on a copy of his great Missa Solemnis. This huge setting of the text of the Roman Catholic Mass took Beethoven four years to write, from 1819 to 1823. In it he summed up a lifetime of musical knowledge, and a lifetime of religious thought.

Beethoven originally intended the Missa Solemnis for the installation ceremony for his longtime friend and patron, Archduke Rudolph of Austria, as the Archbishop of Olomouc, Moravia. Engrossed in the preparation and composition of his Mass (and in some complicated and creative dealings with its potential publishers), Beethoven missed his March 1820 deadline – by several years. The Missa Solemnis was first performed in St. Petersburg in 1824, and only in part in Vienna a month later.

The work Beethoven eventually created is perhaps his greatest, and also one of his most challenging. The piece, says Weinert, is particularly demanding for the orchestra – and for the chorus, which sings almost continuously for the work’s 70-minute duration. While it is probably the grandest of all Beethoven’s works, the Missa Solemnis is seldom performed because of its difficulty, but it represents a “Mount Everest” of choral works.

While the text of the Missa Solemnis is traditional, Beethoven’s approach to it was unique. By middle age he was only marginally a Christian, but he had a profound religious impulse – and he wanted his Mass to appeal directly to the listener’s heart. “Beethoven was not somebody who cranked out masses,” says Weinert. “This was a significant text for him, and he looked word-by-word at what it meant.”

The finely balanced symmetry of the work’s structure was counter-acted by the many surprising and dramatic musical effects. The music incorporates all the styles of religious music that Beethoven knew (which he studied thoroughly before writing the piece), from Gregorian chant to such Baroque works as Bach’s Mass in B Minor and Handel’s Messiah.

“This was a strange piece when it was first performed,” says Weinert. “The important thing in performing it is to make it sound like a brand-new work.”