Eastman BroadBand, a contemporary chamber ensemble at the Eastman School of Music, will be going on the road to New York City and Mexico to present new music from around the world.

Invited to perform at the Festival Internacional Cervantino, a prestigious international artistic and cultural festival, the ensemble will give a free local concert previewing its program of new music.

For this tour, the 20 musicians of Eastman BroadBand will be joined by five guest artists for its concerts in Rochester on Oct. 31 and at the Miller Theatre in New York City on Nov. 1; for three concerts in Cervantino Nov. 3 through 5; and for a performance at the National Conservatory of Music in Mexico City on Nov. 6. Its local “send-off” concert is at 3 p.m. Sunday, Oct. 31, in Room 120 of the Eastman School’s main building.

The music on these programs explores the composers’ interaction with contemporary culture through a number of diverse perspectives. The musical folklore of Mexico, Spain, and Pakistan, the literature of Juan Rulfo and Juan Trigos Sr., the kinetic sculptures of Arthur Ganson, and “the music of architecture” are all examined through the abstract lenses of these imaginative artists.

The local concert will feature the world premieres of Sekhon’s “Fanfare,” a work commissioned by Eastman BroadBand; “Sinfonia N.2” by Trigos; and “Pluck. Pound. Peel. (2nd. Version)” by Zohn-Muldoon, in addition to works by Sanchez-Gutierrez, Morris, and Burritt.

Eastman BroadBand has previously performed in Mexico at the Morelia and Michoacan New Music Festivals. In addition, the group was the resident ensemble for the contemporary music component of the 2008 Festival Internacional Chihuahua. The ensemble has also performed at the SpazioMusica Festival in Cagliari, Italy, and with the Garth Fagan Dance Company at New York City’s Joyce Theatre. Eastman BroadBand has recorded Cantos, with music by Zohn-Muldoon, on Bridge Records.

Another Eastman School presence at the Cervantino festival is the JACK Quartet, whose members started performing together as undergraduates at Eastman. The quartet has appeared in Europe and throughout North America and is known for its performance and championship of contemporary music. 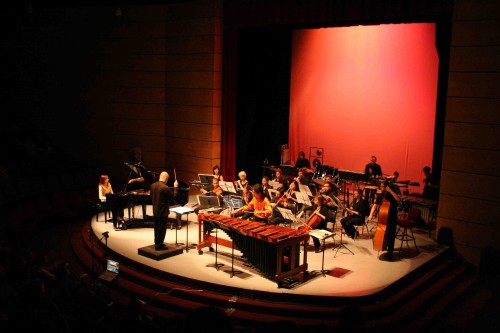