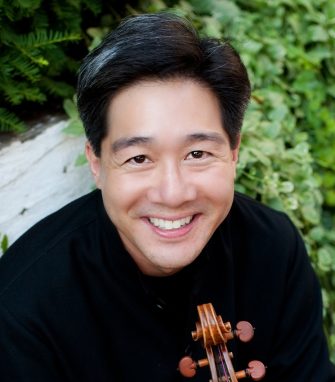 Phillip Ying, as violist of the Ying Quartet, performs regularly across the United States, Europe and Asia. Recent appearances include engagements in New York, Chicago, Los Angeles, Philadelphia, San Francisco, Houston, and Washington, DC, Australia, France, Mexico, and Taiwan among many others. During summers, he has performed at the Marlboro, Seattle, Tanglewood, Caramoor, Norfolk, Aspen, Colorado, Bowdoin, Skaneateles and Montana summer music festivals. He recently won a Grammy award for his work with the Ying and Turtle Island String Quartets, has been previously nominated for a Grammy award for his work with the St. Lawrence String Quartet, and is a recipient of the Naumburg Award for chamber music. Mr. Ying has also been presented numerous times in recital and as a soloist with orchestras such as the Chicago Symphony and the Aspen Festival Chamber Orchestra. With the Ying Quartet, Mr. Ying maintains a vital interest in new music, with recent and planned premieres of works by Chen Yi, Augusta Read Thomas, Michael Torke, Tod Machover, Kevin Puts, Bernard Rands, Ned Rorem, Jennifer Higdon, and Paquito D’Rivera, and is currently pursuing a multi-year commissioning project with the Institute for American Music. He has been recorded by Telarc, Quartz, EMI, Albany and Elektra.

In addition to enjoying a highly successful performing career, Mr. Ying is committed to presenting the arts in creative, unexpected and diverse ways. In 1992, he received a two-year grant from the National Endowment for the Arts to promote chamber music in rural Iowa. Since that time, he continues to be involved in many other projects designed to explore expanded performance concepts as well as the educational and community-building potential of classical music in cities and towns across the United States. Recent projects include partnerships with the La Jolla Music Society and Tod Machover using hyperscore technology, a performing residency at Symphony Space in New York City featuring multidisciplinary presentations, and tours and recordings with the Turtle Island String Quartet.

Mr. Ying is an Assistant Professor of Viola and an Associate Professor of Chamber Music at the Eastman School of Music. Since 2001, the Ying Quartet has also been named the Blodgett ensemble in residence at Harvard University. In addition, Mr. Ying currently serves as President of Chamber Music America, a national service organization for chamber music ensembles, presenters and artist managers, and has been published by Chamber Music magazine. He is a frequent speaker, panelist, and outside evaluator on subjects such as arts-in-education and chamber music residencies, and served on the national jury for the 1999 Coming Up Taller Awards. Mr. Ying has also taught at Northwestern University, Interlochen, and the Brevard Music Center. He received his education at Harvard University, the New England Conservatory, and the Eastman School of Music, and has studied principally with Martha Katz, Walter Trampler, and Roland Vamos.