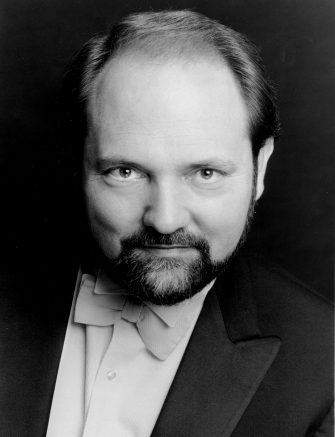 Robert Swensen received his BM from the University of Arizona and graduated MM cum laude from the University of Southern California. He went on to participate in the San Francisco Opera’s Merola program and to have contracts with the Staatstheater am Gärtnerplatz in Munich, the Bayerische Staatsoper in Munich, and with Staatsoper Unter den Linden in Berlin. He won first prize in the Concert Artists Guild International Competition, and presented his New York debut recital in 1987. He has received prizes in other competitions including Premio Giuseppe Borgatti Concorso, Italy, ARD Munich Competition, Walter Naumberg Competition, ‘s-Hertogenbosch in the Netherlands, Puccini Foundation, and George London Foundation.

He made his Carnegie Hall debut as George Brown in Boieldieu’s La Dame Blanche with Renée Fleming and Opera Orchestra of New York under the direction of Eve Queler. He also was a frequent soloist with the Mostly Mozart Festival in Lincoln Center, appearing in the title role of Il Sogno di Scipione by Mozart. Mr. Swensen can also be seen in Oedipus Rex – on a recording for Philips, and in the film for the PBS Great Performances series created by Julie Taymor. He went on to perform the title role in that opera in productions in Montpelier, Naples, and at the Epidaurus Amphitheater in Greece with Gérard Depardieu.  He appeared on Bavarian Television in the St. John Passion with the Munich Collegium/Bayerischer Rundfunk and the Weinachts-Oratorium with the Windsbacher Knabenchor under Hans-Friedrich Behringer and the Bayerischer Rundfunk Orchestra.

His concert appearances have included Carmina Burana for the Munich Festival, Elijah at the Herkulessaal Munich, The Creation at Teatro dell’Opera di Roma, Giuseppe Sinopoli conducting, Schumann’s Das Paradies und die Peri for the Accademia Nazionale di Santa Cecilia, Rome with Wolfgang Sawallisch conducting, the Mozart Requiem in Cologne with Gary Bertini conducting, and as the Evangelist in the St. Matthew Passion at the Amsterdam Concertgebouw, with Nikolaus Harnoncourt conducting.

In the United States, Swensen has appeared in Così Fan Tutte for Santa Fe Opera and Opera Pacific, Turandot for Arizona and Kentucky Operas, Il Barbiere di Siviglia for the New York City Opera tour, and in Don Giovanni and La Bohème for the San Francisco Opera’s Western Opera tour. Other contracts include A Midsummer Night’s Dream, Die Zauberflöte, Il Barbiere di Siviglia and Argento’s Postcard from Morocco for the Opera Festival of New Jersey, Sweeney Todd for Augusta Opera, The Elixir of Love for Madison Opera, and the Stage Manager for Lake George Opera’s professional premiere of Rorem’s Our Town.

A very successful recording artist, his extensive discography includes Saint-Saëns’s Samson et Dalila and Stravinsky’s Oedipus Rex for Philips, Oedipus Rex for Great Performances on PBS, Schumann’s Das Paradies und die Peri for Deutsche Grammophon, the title role in Haydn’s Orfeo, Duca Ottavio in Gazzaniga’s Don Giovanni for Orfeo, St. Phar in Adam’s Le Postillon de Longjumeau, and Graf Hugo in Spohr’s Faust for Capriccio, Orff’s Trionfo d’Afrodite and Mendelssohn’s Elijah for EMI, the Opera Singer in Werner Eck’s Yolimba and the Bach St. John Passion for BMG/RCA, and the tenor arias for the Bach Christmas Oratorio for Teldec. A passionate enthusiast of song literature, Mr. Swensen has recorded Breath in a Ram’s Horn – Songs of Daniel Asia for Summit, Once in a Dream – Songs of Alfven, Grieg, Sibelius, and Rachmaninoff for Capriccio, Night and Dreams – Songs of Franz Schubert with James Day, and guitar for ClearNote.

Swensen is devoted to the performance of lieder and has been featured often in the Eastman Faculty Artist Series, as well as in numerous master class–recital series in the United States and in Europe. He presented a Schwabacher debut recital for the San Francisco Opera series and was a frequent guest of Herman Prey in the Schubertiade performances in New York and Vienna.

Robert Swensen has served on the faculties of the University of Wisconsin-Madison School of Music, the University of Arizona School of Music and Dance, and has been an Eastman School of Music faculty member since 2001. He is a frequent adjudicator for NATS, Concert Artist Guild, and the Classical Singer Magazine Convention, where he has presented annual lectures on the training of the young male voice. For the Eastman Sings summer program, he presented a week-long seminar in vocal pedagogy, “Schubert to Sondheim: Training the Male Singer in Classical and Musical Theatre Repertoire“, with Michael Hanley.