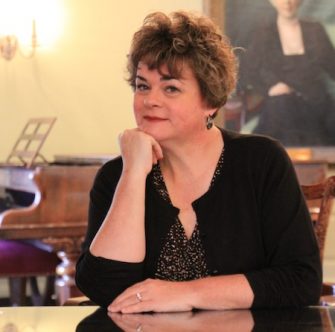 Mezzo soprano Kathryn Cowdrick celebrated her 30th anniversary as a performer by appearing as Despina in Opera Saratoga’s production of Cosi fan tutte–the very first opera role she undertook in 1981. She is a graduate with distinction of Penn State University and Columbia University with degrees in speech and voice pathology. She was a member of the Juilliard Opera Center and began her singing career when awarded an Adler Fellowship with the San Francisco Opera. She participated in the Merola Opera program and sang the leading role in the Western Opera Theatre tour of La Cenerentola. She went on to sing in productions there that include Adriana Lecouver, Falstaff, Manon, Faust, Pique Dame, Il Ritorno di Ulisse, Il turco in Italia, DerRosenkavalier and Jenufa.

Opera News has described Kathryn Cowdrick as an artist who “brightly infused every scene with her singing, dazzling fioratura, and her sexy, warm, comedienne personality”, a remark which seems to convey the essence of this charismatic mezzo-soprano. She is best known for her performances of Rossini and Mozart and has sung with many international and regional companies that include the Spoleto Festival dei due Mondi (Madama Butterfly), Wexford Festival Ireland (Return to Mecca), Scottish Opera (Il barbiere di Siviglia), New York City Opera (The Mikado), Washington National Opera (Merry Wives of Windsor), Los Angeles Opera (Katya Kabanova and Cosi Fan Tutte), Tulsa Opera (The Crucible and Eugene Onegin), the Carmel Bach Festival (Orfeo),the Opera Festival of NJ (Postcard from Morocco). She made her European debut with Nederlandse Opera as Rosina in Dario Fo’s staging of Il barbiere di Siviglia,a role she went on to sing in other companies in 250 performances.She appeared in productions of Cosi Fan Tutte,A Little Night Music and HMS Pinafore at the Wildwood Festival. She has appeared in the leading roles in Il barbiere di Siviglia, LaCenerentola, L’italiana in Algeri and Comte Ory with the opera companies of Koln, Chautauqua, Utah, Memphis ,Vancouver , Arizona, Kentucky, the National Arts Center in Ottowa and on tour with Scottish Opera and New York City Opera.

Her strength as a respected singing actress led to appearances in the past few seasons as Mrs. Lovett (Sweeney Todd) for the Princeton Festival ,Old Prioress (Dialogue of the Carmelites)for Arizona Opera, Marquise (Le fille du Regiment) for Kentucky, Arizona and Opera Saratoga, Berta (Il barbiere di Siviglia) for Florentine , Tulsa, Arizona and New York City Opera, the Witch in Hansel and Gretel and Augusta Tabor (Ballad of Baby Doe ) for Augusta Opera, Suzuki in Madama Butterfly for Artpark, Aunt March (Little Women) and Ruth (Pirates of Penzance) for Ft. Worth Opera, Fidalma (Il Matrimonio Segreto), Zita (GianniSchicci/Buoso’s Ghost) and the Old Woman in Candide for Opera Saratoga . She also appeared as Mrs. Gibbs in the professional premiere of Ned Rorem’s Our Town.She sang the title role of Orfeo for Opera Memphis and recent performances include Madame Halitiere in Kentucky Opera’s 2014 production of Cendrillon, Ruth in Pirates of Penzance for Chautauqua Opera , Meg Page for Mercury Opera Rochester’s Falstaff and Marcellina (Lenozze di Figaro) for Ft. Worth Opera.

Miss Cowdrick sang the role of Julia Child in Hoiby’s opera Bon Appetit for Child’s induction into the National Women’s Hall of Fame in 2007-an opera recently recorded for Albany Records. She can be heard as Charmian on the 1984 Grammy-award winning album of Antony and Cleopatra recorded live at the Spoleto Festival and Jenufa recorded live from Carnegie Hall on Gramaphone Bis with the Opera Orchestra of New York starring Leonie Rysanek, Gabriella Benackova and conducted by Eve Queler.

She is one of those rare singers who continues be an active performer while teaching, having sung in over 40 regional productions since coming to Eastman, including the title role in The Medium with Eastman Opera Theatre. At Eastman, she teaches studio voice,vocal pedagogy. and a class for the Institute for Music Leadership at Eastman, The Singer’s Professional Journey.She has been on the summer faculty of the Seagle Colony, the Taos Opera Institute and Summer at Eastman. She has been a contributor to Classical Singer Magazine. Her most recent article on “Mentoring and Parenting the Young Classical Singer” appears in the September 2012 edition and she was recently interviewed for their February 2019 spotlight column on outstanding voice professionals.

She is most proud that for the past 10 years, her students have been members of Young Artist Programs that include the Merola Program of the San Francisco Opera, Chautauqua Opera, Ft.Worth Opera, Music Academy of the West, Wolf Trap, Glimmerglass Opera, Pittsburgh Opera, Crested Butte Festival, Santa Fe Opera, Ohio Light Opera, Florentine Opera, Boston Early Music Festival, Opera Saratoga, Caramoor Festival, Aspen Music Festival, College Light and Des Moines Metro Opera. They have also sung leading roles with companies that include the Metropolitan Opera, Kentucky Opera, Sarasota Opera, Oper Frankfurt, Music Academy of the West, Opera Saratoga and have appeared on Broadway in productions of Hello Dolly, Sound of Music, and The King and I.