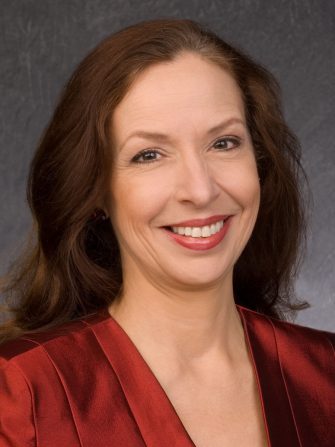 The New York Times has called Katherine Ciesinski “a singer of rare communicative presence, and a musician of discrimination and intelligence.” This accomplished American mezzo-soprano pursues a fully integrated career, exploring the world of today’s composers as well as the established classics of the lyric stage.

In the recent seasons she has performed the world premiere of The End of the Affair by Jake Heggie with Houston Grand Opera, which was broadcast nationally on NPR’s World of Opera. She has also appeared as Herodias in Salome (Fort Worth), Aunt Cecilia March in Mark Adamo’s delightful Little Women (Mexico City), as Effie Belle Tate in Carlisle Floyd’s masterpiece Cold Sassy Tree (Opera Omaha), and as the Principessa in Puccini’s Suor Angelica (Opera Theater of Saint Louis and Hawaii Opera Theater). She sang song cycles of Prokofiev and Shostakovich in a multi-media concert entitled The St. Petersburg Legacy with Da Camera of Houston at the Bard Music Festival in New York and again in New Haven. She made her opera directing debut in 2007 with Handel’s Flavio for the Moores Opera Center / Ars Lyrica Houston and returned to direct Britten’s The Turn of the Screw the following season.

Ms. Ciesinski has also performed with many of the world’s leading orchestras, including the Cleveland, Minnesota, and Philadelphia Orchestras, the Symphonies of Chicago, Boston, San Francisco, Houston and Toronto; and in Europe, with the Berlin and Vienna Philharmonics, L’Orchestre de Paris, the London Symphony Orchestra, the Dresden Staatskapelle, and L’Orchestre de la Suisse Romande. She has been heard in recital across the United States and in Paris, Cologne, Zurich, Milan and at the Aix-en-Provence, Geneva, Spoleto and Salzburg Festivals. Her contemporary chamber music activities have included performances at the Caramoor Festival, New York; Musica Festival, Strasbourg; Ars Musica Festival, Brussels; Festival d’Automne, Paris; Voix Nouvelles, Fondation Royaumont; Schlern International Festival in Italy, and with the Ensemble Intercontemporain in Paris.

One of the few master performers to also become a master teacher, Ms. Ciesinski is a frequent clinician at the annual International Symposium on Care of the Professional Voice in Philadelphia. She created the Vocal Workshop for the annual International Composition Seminar at the Royaumont Foundation in France, and the vocal chamber institute Close Encounters for the Texas Music Festival. She has lectured in and served on the steering committee for the University of Texas School of Public Health’s Healthcare and the Arts Series and lectured for the Eastman/Cornell Music Cognition Symposium in Rochester. She continues to act as a judge for the Metropolitan Opera National Council auditions and is currently on the international faculty of the Artescénica Encuentro Operistico in Mexico. Her recent students have achieved performing successes in Europe and South America, one as a Fulbright scholar in Cairo, as well as in the apprentice programs of the Santa Fe, St Louis, Chicago Lyric, Seattle, Los Angeles, Central City, San Francisco, Orlando, Fort Worth, and Des Moines Metro Operas and serve on the faculties of Michigan State, Oklahoma State, Texas Tech, San Jose State, Sam Houston State, and Houston Baptist University. Other students are also active in a wide range of repertoire from early music to world premieres, with the Boston Early Music, Aspen, Tanglewood and Weimar Lyric Opera Festivals as recent examples. Formerly Professor of Music and Chair of Voice Studies at the Moores School of Music, University of Houston, she joined the faculty of the Eastman School of Music in August of 2008.