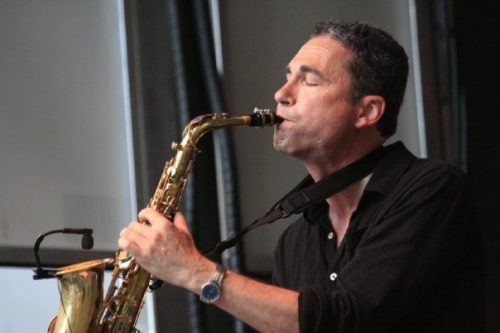 The Music Educators Wind Ensemble and the High School Wind Ensemble are two performance groups sponsored by the Eastman Community Music School that engage music educators and high school students in the Rochester area in high-level performance groups throughout the year. Bill Tiberio, a teacher at Fairport High School and ensemble instructor at numerous colleges including the University of Rochester and Ithaca College, not only founded the two groups but directs the ensembles as well.

The Music Educators Wind Ensemble is comprised of Rochester area music educators and related professionals, and performs both traditional and contemporary wind band literature. The High School Wind Ensemble is a five-day intensive workshop for students in grades 8–12, as well as college students, who reside in the Rochester area and are music majors or minors. Both groups will be performing as a part of the Summer @ Eastman performance series.

Why don’t you start off by telling me a bit about yourself and your involvement with Eastman?
I attended Ithaca College for my undergrad. I had actually transferred there, and graduated in 1984. I originally went to SUNY Geneseo to study with a particular clarinet teacher, so I learned some foundations in music there; they have an excellent school. After attending Ithaca College, I taught in Auburn, New York, for four years, then I found a job at Fairport High School, and I’ve been there for 30 years. So I’ve taught for 34 years so far, and I’m not thinking of retiring yet, I could have retired a couple of years ago, but I’m still having too much fun. Once I started teaching I did my master’s in four summers at SUNY Fredonia.

The Eastman Community Music School is something I’ve been involved with for over 30 years. My first involvement was working with the summer jazz program, which involves kids from all over the country. Over the years, I got involved as an instructor at the River Campus at the University of Rochester. I started a wind ensemble for music educators and a jazz ensemble for music educators, in the last six years and ten years respectively. All of the groups are sponsored by the Eastman Community Music School; we do some performances and rehearsals at Eastman, as well as some work out in the community. In the summer I also work with the High School Wind Ensemble Workshop, which is another program I started some time ago.

Clearly you’re quite active in music education; what made you want to become an educator?
It’s a leap of faith to become a teacher, especially in the arts, because you don’t really know about your effectiveness until you’ve been doing it for 10 years or so, so you kind of just have to dive in. I was motivated by trying to pursue what I felt passionate about; I loved playing music when I was in high school and I really liked relating to kids too. I wanted to put those two passions together, my love for music and my ability to relate to young people, to become a music teacher.

I remember specifically, when I was at SUNY Geneseo, I had an opportunity to do some tutoring when I was only a freshman. It turned out some friends in the music department needed help playing clarinet because it wasn’t their primary instrument, and I really enjoyed that experience of trying to help somebody else with their musical skills.

Yet you still maintain a very busy performance schedule.
Yes, professionally I mostly play saxophone, but clarinet was my major in college. I still love to play clarinet, but I don’t get a lot of chances to play it professionally. I have my own band, The Bill Tiberio Band, and we just played at the Rochester International Jazz Festival. We’ve been really lucky to be invited there each year. I do other festivals, concerts, and some club gigs throughout the year with that band. I also play in several party bands and act as a sub in bands, so I’m really active as a player. and I’m fortunate to have that chance to keep doing it.

As a performer and an educator, how do you balance the two?
For me it works because music is really all that I do. My hobbies involve playing music, and music has also become a very social thing for me. I play with my friends;that social contact and getting to know people through music is really important. It is a little bit tough to balance teaching at a public high school and several colleges, and then through working gigs and participating in other opportunities to play, but I’m able to put pieces together and make it work.

You work with the Music Educators Wind Ensemble, as well as the High School Wind Ensemble. Can you tell me a little bit about the two ensembles?
Years ago, there was an educators ensemble led by a very well-known educator, named Alfred “Corky” Fabrizio. They called it Corky Band. He reached a point where he wasn’t able to keep doing it, so the group disbanded.I felt like there was a need to create an opportunity like that again.

I waited a bit, and then I approached the Eastman Community Music School, who agreed to put their support into what is now the Music Educators Wind Ensemble. We do three to four concerts each school year and we do a concert at Eastman Theatre every summer. The group has about 70-75 players from all over the Rochester area, and the summer concert will cap a five-week rehearsal series.

The High School Wind Ensemble is made up of students that live in the area, or in some cases they live outside the area and they’re staying with family or friends in Rochester for the week. We rehearse three hours a day for five days, so the concert will cap this one-week series of rehearsals. We’re going to perform a good hour of music that we’ll learn in that one week, with a group of people who don’t really know each other.

How do you select the pieces you are going to perform?
For the High School Wind Ensemble, I always try to bring some classic repertoire, and I try to have some new things that the students haven’t played in their own schools. Sometimes I have to assess their strengths and weaknesses on the first day, then I’ll pick music that’s appropriate for those strengths and weaknesses.

The educators group is already very skilled, so they want to be challenged. Typically I’ll pick repertoire that they might have played in college, along with pieces that the top groups in the country play. Overall we try some really challenging repertoire with them, and they come in wanting that kind of challenge.

How do you think that being a part of these groups is beneficial for you as an educator?
It makes me grow as a conductor, as a teacher, and as a planner. It also helps me to develop rehearsal skills, because the groups are very capable of doing so many really fine things musically. It helps me keep the greatest goals of what we’re doing in teaching always in my mind: to share our passion and our love for music.

What can we expect from your upcoming concert?
In the Music Educators Wind Ensemble concert, we’re doing a couple of classic pieces, including Enigma Variations by Edward Elgar and Procession of the Nobles, which is a Rimsky-Korsakov classic. Dr. Mark Scatterday is going to conduct those pieces, and he brings such experience and a wealth of knowledge to that preparation. We’re going to do a couple of new things as well with that ensemble.

For the High School Wind Ensemble Concert, there will be a similar mix of some real classic repertoire. We’re working on a piece called An Original Suite, by Gordon Jacob; we’re going to do a well-known Ticheli work called An American Elegy, a memorial to the victims of the Columbine shooting; and we’re going to do some brand new works, including a piece written this year by an Eastman alumnus, Steve Danyew. It’s called Into the Silent Land and it’s a tribute to the victims of the Sandy Hook Elementary School shooting; he’s a graduate of that school.

So there’s a mix in both of some old and some new works for band. I should mention it’s not just winds playing, you’ll hear some really good percussion as well. We love to perform for as many people who are interested in coming, so please come to these free concerts because they’re really rich in experiences!