Powerful Pipes and Rising Stars: Eastman Organists at AGO 2018 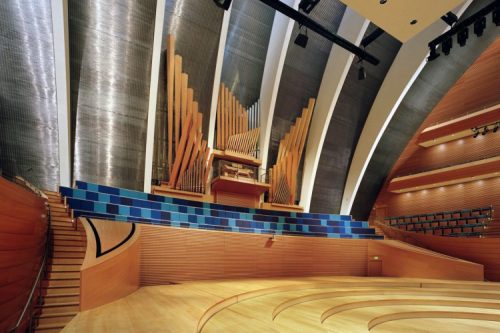 The Julia Irene Kauffman Casavant Organ at the Kauffman Center for the Performing Arts, one of several venues for AGO 2018. Photograph courtesy of Tim Hursley

The annual convention of the American Guild of Organists was held from July 2 through 6 in Kansas City, Missouri. Eastman’s Organ Department always makes a sterling showing at this event, but this year was exceptional. David Higgs, the chair of Eastman’s Department of Organ, Sacred Music, and Historical Keyboards, offers some recollections of the breadth of Eastman’s involvement in AGO 2018, from longtime alumni to current undergraduates.

There were more than 35 Eastman people involved in the Kansas City AGO convention, despite the fact that it was in Kansas City. Here’s a list of Eastman students, alumni, or faculty members who performed, lectured, presented, recorded, composed, turned pages, or did other various things at this Convention:

At the competition, there were nine semifinalists, three of whom were Eastman students. Two made the finals, and they got the second and third prizes, respectively: Caroline Robinson and Daniel Chang. (Daniel was a composition student of David Conte at San Francisco, and a pianist. Also accomplished in martial arts … he knows how to practice!) The other semifinalist was Isaac Drewes. 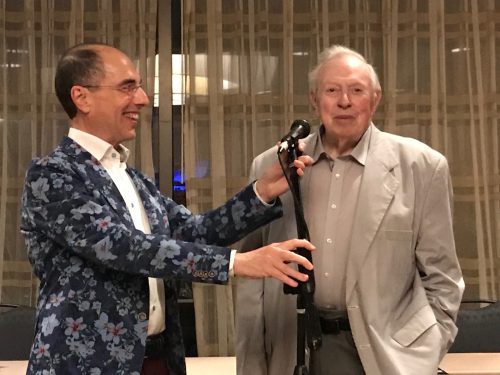 David Higgs with Wm. A Little at the Eastman AGO 2018 reception

We had a wonderful Eastman Alumni Reception on July 3; thanks to Laura Souza, Cathy Hain, Felicity Democko, and Madeleine Woodworth for arranging it. Between 80 and 100 people attended (many who got their “second wind” showed up at midnight…), and we announced Eastman’s future “Wm. A. Little Fellowship in Organ” bequest, with Professor Little present. An inspiring moment.

The reception was a resounding success, and I heard such comments as “What a wonderful vibe in the room that night”, “what’s happening at Eastman gives me faith in the future”, “Eastman is so successful — what’s your secret?”, “I’m so proud to call myself an Eastman alum”, and most importantly, “Thank you for having this wonderful party — I look forward to it as the highlight of each convention.”