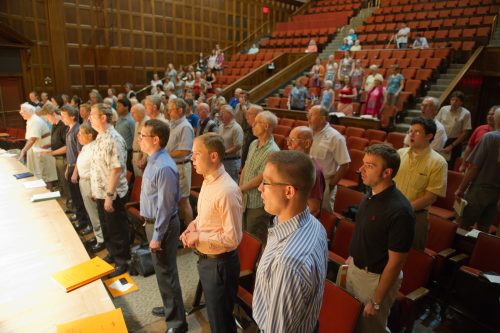 Photographs are from a 2012 Eastman Summer Sings! session.

Eastman Summer Sings! is sponsored by the Eastman-Rochester Chorus and offers a series of choral music reading sessions to singers of all ages and abilities. Through offering the Rochester community the opportunity to perform choral masterworks with Eastman faculty, students, and soloists from the area, the program has seen massive success as hundreds of Rochesterians participate each summer in these relaxed and engaging singing experiences.

Director William Weinert, professor of conducting and director of choral activities at Eastman, will begin his 24th season with Eastman Summer Sings! Tuesday, July 3. With scores provided at the door, all sessions are held at 7:30 p.m. in Kilbourn Hall and are free, with a $5 suggested donation.

The 2019 Summer Sings schedule is:

Could you give a brief overview of the Eastman Summer Sings! Program and what you think it brings to the community?
This is the 24th year that we’ve done this, I guess we kind of revived it from previous summer choral events. We decided to do four Tuesdays in July, because Tuesday’s the regular night for Eastman-Rochester Chorus (ERC) rehearsal. Basically, most of the community choruses and church choirs shut down for the summer, so this provides something for people who like to come out one night a week and sing. People from the community come and read through more or less familiar, big choral pieces.

What, in your opinion, is the goal of the program, and have you found the program to be successful in accomplishing that?
It’s an opportunity for people to feed their need. Some of them really, really feel this need to engage with serious choral music. With ERC, if we have a break and we cancel a Tuesday, people go, “What? What? You mean there’s not going to be rehearsal?” You know it’s sort of like cancelling church: “What? I need to do this every week.” For the whole summer we don’t meet regularly, so people are usually very eager to come out and do something that’s their favorite hobby.

How did you come to start directing the Summer Sings! Program?
Well, I conduct the Eastman-Rochester Chorus, that normally sponsors the program. [We started this] the summer after my first year. The first year we did them as a series like this was 1995. But it’s a longstanding thing in many cities. In New York there are probably four or five different series of them. And I came from Madison, Wisconsin, where they did them; in San Francisco they do them. So it’s a very common thing really.

Very cool, and having been director for going 24 seasons, how do you think this program has been able to shape you as a director, and the community members that participate?
I think the way it is has shaped me, is that [during Summer Sings] you can’t really go back and fuss, you know? You have to go through the piece. The thing is [with instrumental ensembles], you go through a movement or you go through the piece, and then you go back and rehearse details. With choral music, there’s sometimes this mindset that we can’t really get through a piece, so we’re just gonna stop and fix things as we go. So the process can be very stop-and-go and very different from the way professional instrumental ensembles work.

We don’t usually include every single movement, but we do include all choruses and many of the solos. If we’re rehearsing to perform say, The Creation with ERC during our regular season, we’re rehearsing the choruses, which are only about 30% of the piece, and then at the dress rehearsal you finally get to hear the rest of it. But at the Summer Sings, we get to hear the whole thing right away that night. So it’s the dress rehearsal and the informal performance all together.

What are the most rewarding aspects of a program like this?
I think of the Brahms Requiem, which we’re not doing this summer, but I remember, one time in particular, a few years ago, that I had recently heard it in a performance. And then we came and did the piece in a Summer Sings! What our people did just reading it was better than this performance I had just heard.

I got to thinking, why is that? And it’s because many of our people had sung the Brahms Requiem here, they had sung it there, they’re in the Oratorio Society and ERC and they did two movements from it with their church choir, and they just have had sort of a long bath in it over decades, a long experience of it. And they can call on that with no rehearsal at all, it just comes out, and that’s kind of a miracle in a way. It wasn’t perfect, but it was more perfect than the performance I had just heard.

And it’s also a tribute to the tradition of people who taught it to these singers and sang it with them, maybe including their parents. And all this goes back usually hundreds of years. Take the Mozart Requiem. How many times has this or that person sung it, and then who was their conductor, and how many times did he or she experience it along the way? And it can go all the way back to Mozart; it’s this long, linked tradition that enables us to make something beautiful happen in one night. I love new music, but you could never do that with a brand new piece, because there is no tradition of it to draw on.

And on the flip side of that, what are some of the most challenging aspects of a program like this?
Well, for the conductor, the challenges in any rehearsal are, “Do we go back and work on that again or not?” It’s especially challenging when you’re not going to have a “next week,” it’s just “now” and you need to decide “was that good enough or not.”

I think the challenge for the singers is to always to be looking ahead. Not “Oh, I just messed that up, oh, maybe we’ll fix it the next time.” There’s probably not going to be a next time.

99% of the choral experiences that people have are, “we’re going to take the piece apart and try to fix every little thing.” At Summer Sings they have to get used to the fact that we’re not going to do that because there’s a time limit. It can raise everyone’s level of concentration a lot. 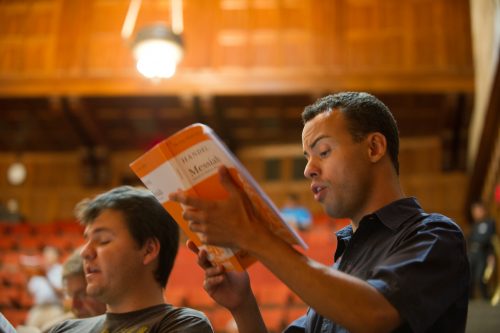 This has been going on for 24 seasons, which have been very successful. What do you think has made it so successful?
This sounds so old fogeyish, but it’s the pieces themselves. It isn’t just that we do these same pieces, everybody does these same pieces; they are the mainstream tradition of choral music.

A few years ago at church we did a Christmas performance of Vivaldi’s Magnificat and invited the young people to sing with us. I remember this kid who was in the 10th grade sang with us, and afterwards he said, “Why can’t I sing this kind of music all the time? It’s just put together so well!” He was maybe singing in his high school choir also, and used to singing kind of garbage-y music. So…we don’t do garbage-y music. I don’t know if there’s a more tactful way to say that!

Also a lot of these choral pieces are religious, which I think kind of plays into their affection for these works.
Yes, I would say maybe spiritual would be a better word. This repertoire contains a lot of Christian-oriented music, and yet a lot of people who are not Christian are still very enthusiastic about it because of the way it’s put together. The spiritual depth that these composers accessed, it never ceases to amaze me.

I wondered what influenced you to choose the four specific pieces you’re performing this season.
Honestly, the main consideration is, what did we do last year? We don’t want to do exactly the same pieces. Aside from not repeating things too much, it’s picking things that will be familiar or in a familiar style, and for that reason we’re going to be able to do them fairly well in the time that we have. 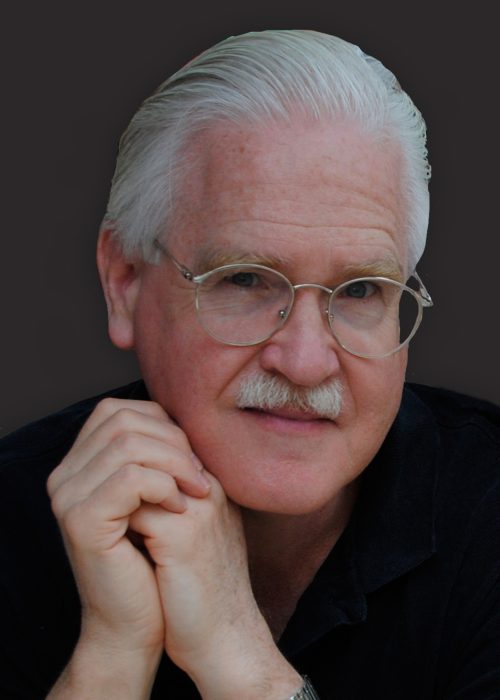 Do you have any final thoughts?
People usually sing in choruses in high school and often in college. Then they get out and they miss it, so they sing for a couple years in their early 20s; but then they get married and have kids and move away and get a job and it’s very time consuming, and they drop out, often for 20 or 25 years.

So the people that audition for a community chorus are often in their mid 50s, they’re retired and now have time. It’s terrific when these people rediscover their voices, but really, the people who often stop singing are people aged about 25 to 55, and physically those can be their best years of singing. We do everything we can to keep singers active through all of their adult years.

Nicole Peter is an intern in the Eastman Communications Office.