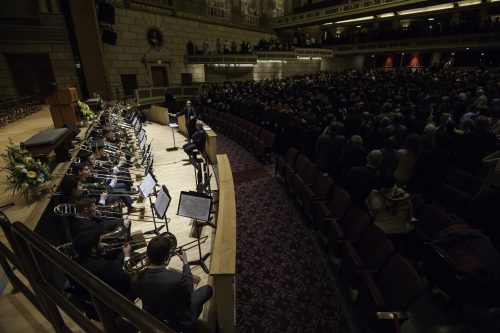 This year the Eastman Trombone Choir celebrates its 75th anniversary. This iconic Eastman ensemble has been an example of the high quality musical performance and education for which the Eastman School is so renowned since its founding in 1941 by former Professor of Trombone Emory Remington. The first concert of its 75th season takes place in Kilbourn Hall on November 16. To learn a little bit more about the history and workings of this Eastman ensemble I spoke to one of its co-directors, Associate Professor of Trombone Mark Kellogg, as well as Eastman trombone student and Trombone Choir Teaching Assistant Lauren Eisenreich.

Can you tell me a little bit about the history of the Trombone Choir at Eastman?

Mark: Emory Remington was Professor of Trombone at the Eastman School from 1922-1971 and he founded the Eastman Trombone Choir in 1941. To the best of my knowledge, it was the first such collegiate ensemble of its kind in the United States. The idea of a trombone ensemble dates back to the time of the Renaissance, when composers used the sound of the trombone to reinforce vocal lines. This time-honored tradition was continued by composers like Bach, Handel, Mozart, Beethoven, and Haydn. The Moravian Church has used choirs of trombones to accompany their services for centuries. But Remington put his own spin on these traditions to form a collegiate performing group with a wide range of expressive and stylistic possibilities. My understanding is that Remington created the Choir as a way to illustrate his pedagogical ideals. Using this methodology, students were exposed to his musical and technical values in the dual settings of a private lesson and a performing ensemble. Remington also encouraged his students to arrange and compose for the ensemble, creating another avenue for expression in the trombone studio. 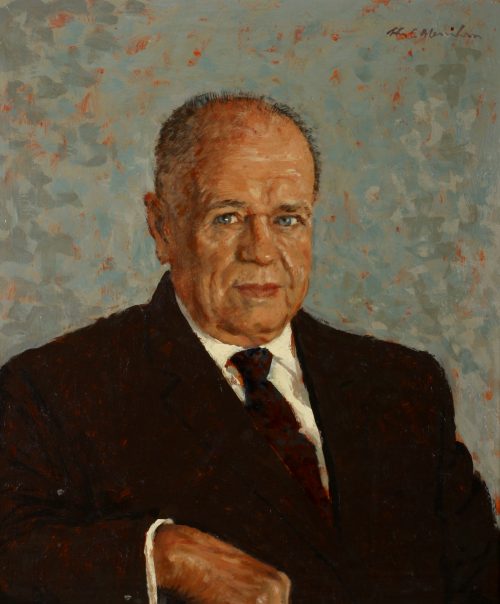 What is it like directing an ensemble with such history and tradition, while balancing that with your own vision for the ensemble?

Mark: The concepts that Remington introduced during his tenure at our school are actually quite timeless, so it’s easy to follow his blueprint, even today. I know that Larry (Eastman Professor of Trombone Larry Zalkind) and I are always mindful of the trombone history of our school and as I say quite regularly, we stand on the shoulders of not only Remington, but of Donald Knaub, George Osborn, and most recently, John Marcellus, who all added so much richness to the trombone traditions at Eastman.

How does the Eastman Trombone choir add to the trombone student experience and education at Eastman?

Mark: I like to think that performing in Trombone Choir continues to be an extension of Larry’s and my pedagogical philosophies, just as it always has been for our predecessors. It also provides another performing vehicle for our students and a way to build camaraderie and community amongst our students.

Can you tell me a little bit about this upcoming concert and any other plans the ensemble might have this year as it celebrates its 75th anniversary?

Mark: For the 75th Anniversary Concert, we will be performing a wide variety of repertoire that reflects the current state of the trombone choir genre. Included in the program will be an original composition by one of our current members (Tanner Jackson’s Fanfare Genesee), a new transcription of Bach’s Organ Prelude in E-flat major (arranged by alumnus Ralph Sauer BM ‘65), Four original pieces for trombone choir that have all been composed in the last thirty years, a beautiful setting of Biebl’s Ave Maria, an arrangement of themes from Wagner’s opera Parsifal, and a new arrangement by Tanner Jackson of movie music from the Godfather films. It will be an attractive tapestry of different musical styles, reflecting both the history and the future of the Trombone Choir.

Can you tell me a little bit about what it’s like to perform in the trombone choir at Eastman?

Lauren: It is a pretty surreal experience. There are a lot of great choirs out there but to find one with this depth of talent and such an incredible legacy is really very special.

How does performing in the trombone choir add to the normal education you receive at Eastman?

Lauren: With a relatively large school, there are rarely times when every person studying the same instrument gets together to work towards a common goal. With trombone choir, we have the opportunity to interact with a larger number of people and learn from our fellow students.

What sort of responsibilities do you have as the trombone choir TA?

Lauren: While my official duties as the Trombone Choir TA are to facilitate the choir library and keep the members informed, I feel passionate about this group so I often find myself taking on other responsibilities. In particular, I have made a real effort this year to promote this group. I was able to set up the first-ever live stream of the choir so that people all over the world can share in the experience. In building the website and revitalizing the digital presence of the entire trombone studio, we are working towards expanding the reach of our network at Eastman.

What is your favorite part about playing in Trombone Choir?

Lauren: My favorite part about trombone choir is the camaraderie. For two hours each week, twenty-four trombonists are able to get together and make music. The trombone studios at Eastman have a truly unique quality. Rather than a competitive atmosphere, the members of both studios honestly want each and every person to succeed. When so many talented individuals perform it is assumed that the result will be good, but it is the friendship between the members that makes performances by this group spectacular. 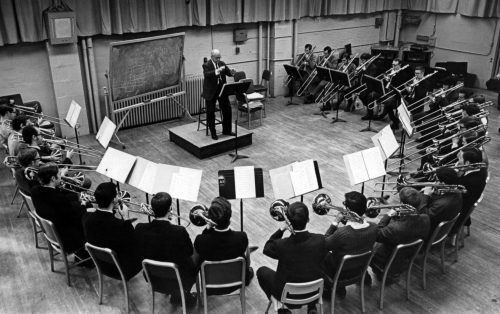 Emory Remington conducts the Eastman Trombone Choir in the 1960s