Sharing the “Blame”: Composers Ricardo Zohn-Muldoon and Carlos-Sanchez-Gutierrez on “Don’t Blame Anyone” 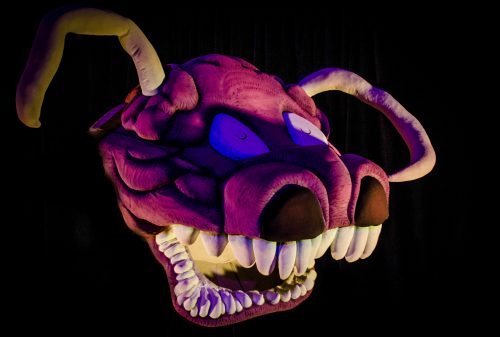 Photographs throughout the post show the puppets used in Don’t Blame Anyone.

Don’t Blame Anyone is the first opera by Eastman faculty members to premiere at Kodak Hall in 60 years. This piece combines music, puppetry, dance, and theatre into a two-act opera, and is a collaboration of performers from the United States and Mexico. (It will also be performed at Teatro Diana in Guadalajara, Mexico on November 24.) The Eastman School of Music’s BroadBand Ensemble has joined forces with El Arte de los Titeres, Secretaria de Cultura (Mexico), Universidad de Guadalajara (Mexico), and PUSH Physical Theatre to produce a spectacular performance that explores the birth, growth, and eventual death of the elusive “creative idea.”

The music is composed by Eastman’s award-winning composers Ricardo Zohn-Muldoon and Carlos Sanchez-Gutierrez, and the production features life-size abstract puppets designed by Antonio Camacho and Olga Gamez of La Coperacha, one of the oldest theater groups in Mexico, as well as performances by the physical illusionists of Rochester’s PUSH Physical Theatre. The groups come together on stage to represent a variety of characters: from “ideas in the making” to a human staircase. PUSH Physical Theatre Artistic Director Darren Stevenson developed the opera’s original choreography.

Original drawings by internationally acclaimed Mexican illustrator/cartoonist José Ignacio Solórzano (“JIS”) were created to inspire the performance’s imaginative concept, with puppetry design and narrative inspiration drawn from celebrated aphoristic Mexican poet Raúl Aceves. Famed soprano and new-music pioneer Tony Arnold plays the leading role as “The Author,” who toils to create a significant work as she faces the specter of the blank page.

Dan Gross interviewed the composers of Don’t Blame Anyone, Carlos Sanchez-Gutierrez [CSG] and Ricardo Zohn-Muldoon {RZM], on November 7. We are presenting a two-part abridged version of this interview on our blog. 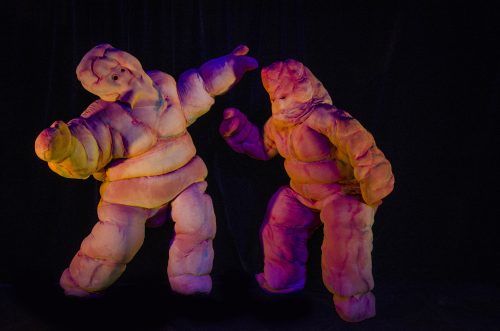 There are so many collaborations and facets to this “opera.” Where did the root idea come from?

CSG: Antonio Comacho, from La Coperacho – the puppet company – approached me about sixteen years ago, with the idea of doing a puppet opera. That didn’t go anywhere, except about three years ago, he approached me again, and said that he had found some money to actually make it possible. I wanted to do something with Edward Gorey’s [work], but that turned complicated because getting the rights is nearly impossible these days.

This is when we turned to a number of sources, very importantly, JÍS, the cartoonist; he’s a bit of a celebrity in Mexico. Very well-known, and not a typical cartoonist at all. He’s a very philosophical artist, and we have always been drawn to his work, and we know him personally. It was very natural for us to gravitate towards his work.

He gave some points as to how to treat this poetically, and in what directions this could go. While we were on our own, looking for various other possibilities, Ricardo was added to the team, and Darren Stevenson from PUSH. Each one of us would bring our own little contribution, whether it was a poem or an author like Raul Aceves; Ricardo has worked with him in the past. Or the Argentinian writer Julio Cortasa, whose stories are very inspiring, and very much in line with the playfulness we were interested in, even though the themes are serious, or dark in some cases.

Little by little through these conversations, the body of this so-called “opera” was created. It truly is a work of collective thinking and collective contribution.

How long did this whole process take?

RZM: Well, the creative part started, I would say, about a year ago.

This all happened very quickly then!

CSG: Yes, partly because the funding had a deadline attached to it. It comes from the Mexican government primarily, and it needed to be spent during the current fiscal year, so that was good incentive for us.

RZM: So as Carlos was saying, after having these meetings (with all three of us), and going through a number of possible scenarios, we settled on a basic question, which was the idea of the problem what we were actually facing; creativity and how does art actually happen? So thanks to JÍS in part, it became clear to us, and we had some wonderful, wonderful periodic meetings with Carlos and I in which we tossed ideas and gradually put this together.

I think Darren, given his experience, and his brand of imagination, really nailed the larger concepts fairly quickly, and then it was all this give-and-take. After some months, we basically had what is the equivalent of a “libretto,” though it is not a “libretto.”

CSG: It’s a series of scenes that each explore a unique aspect of this “blank page” dilemma that every artist has to confront in his own way.

When we were getting together with Darren, it was really quite amazing. I remember quite distinctly, early on in the process, talking about this one scene, he just stood up and acted out the scene for us, right there in the living room. And right there, we had it. We knew that was going to be part of the show, and there several scenes like that, that just came up from conversation, and stayed in a very fundamental way as part of the entire show.

And then there’s the work of actually writing the music. 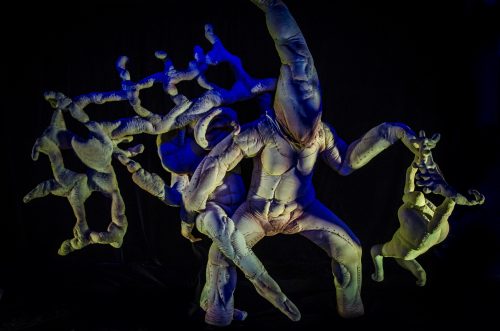 With all this stuff going on, you haven’t even talked about writing the music yet! How did you go about writing music after the libretto was written?

CSG: Indeed, we had a “storyboard,” which is a number of sequential series of scenes that creates a general dramatic line. Once we had that, it was time to actually face the blank page. Ricardo went to his dungeon, and I went to mine, and each of us worked on our own.

We decided that this work was going to be in two acts, and that I would write the first act, and Ricardo would write the second act, as opposed to trying to write all of it together. We love each other, but not that much. We’re very jealous, and we have our own particular way of writing music. I think this adds a very interesting element to this, an “opera” that has been written with two distinct vocabularies, and looking for the same result, in a way.

So we worked separately, each of us in our own studios, and produced separate acts. I don’t yet know some of the music that Ricardo wrote, and Ricardo doesn’t know some of the music that I wrote, a little bit. We know most of what we’re doing, but there are little things that we haven’t yet shared with each other, that the choreographer is working with, along with the puppeteers. Part of that mystery is an added element of intensity to this process.

I’m not sure that I would necessarily recommend that others do this, but that is now it happened. It’s fascinating to see that a project could be put together this way. And so far, so good.

Ricardo, could you tell us about the Eastman Broadband ensemble, and their involvement?

RZM: The Broadband Ensemble was a group that Carlos and I began, I would say, eight or nine years ago. Like this current project, Broadband began as an act of spontaneous combustion. We needed an ensemble for a festival, and on separate occasions we realized that it would much more cost-effective and also much more artistically rewarding to bring Eastman students. Not only do they have high standards of playing, but they have a commitment to this new music which is very hard to find sometimes, even in professional groups.

The current group has a combination of current Eastman students with alumni. The idea is that the alumni are, in a way, mentoring the younger performers just by their playing together, often in situations that are professional, as in festivals all over the world – Mexico and Italy and other places.

What’s the general size of the ensemble?

RZM: Ten instrumentalists and four singers. It’s a substantial group, but still a chamber group. It’s a very nice group; it has not only saxophone, but guitar, so it’s flexible, and the musicians are terrific. The music director is Tim Weiss, who is the director of the Contemporary Music Ensemble at Oberlin Conservatory. We’ve worked with him for a number of years.

We expect a fantastic performance. They have worked with PUSH in some other settings, some years back, so they’re very excited to collaborate with them again, and to be going to Mexico.

Soprano Tony Arnold is taking the lead role. What does she bring to your work?

CSG: Well, I know that I would have written a very different piece if Tony weren’t my soloist. Everything I wrote, I wrote thinking of what Tony does best, which is a lot. She does everything very well. I was hearing her voice, and I was thinking about the kinds of things I could see her do on stage. Ricardo has worked with Tony much more directly for much longer, and I’m sure that’s true for him as well.

Tony brings not just virtuosity of a different kind, and a musicianship that is rare, but also a sense of stage presence that is very unique, and, let’s face it, pure courage. She will do anything, basically, and at least in the first act, she is being asked to do quite a bit of acting of various sorts.It’s difficult singing, it’s difficult coordination with the actors, and complex acting. And I know she can do all that while singing this very difficult music.

So Tony is essential for this project. And I would say the same is true for the rest of the orchestra, because there’s a core group of musicians in Broadband in this performance that has been playing our music for a long time, and know it really well. Even though we have distinct languages as composers, the ensemble is very much in tune with the kind of gestures that Ricardo and I like to cultivate. They deliver it not just with great precision, but also with a very particular know-how. They “get us,” so to speak, after eight years of playing us, they know what to do. 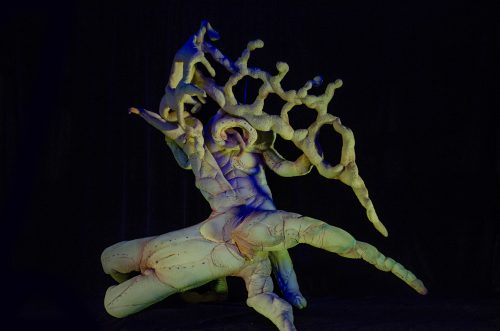 Don’t Blame Anyone premieres in Kodak Hall at Eastman Theatre on Wednesday, November 16, at 8 p.m. Follow this link for ticket information.