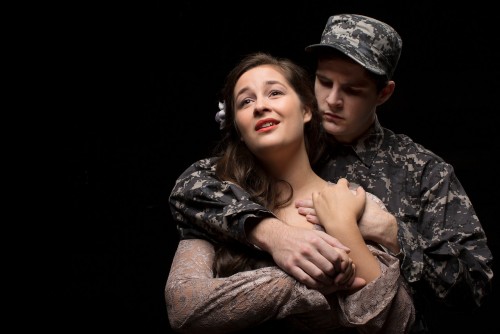 A scene from Hydrogen Jukebox. Photograph by Grant Taylor

This weekend, the Eastman community will be treated to one of its annual traditions — the fall opera production in Kilbourn Hall! However, this year the opera is a very un-traditional one: the Philip Glass and Allan Ginsberg masterpiece Hydrogen Jukebox, directed by Steven Daigle and with musical direction by Benton Hess. I interviewed Eastman students Alan Cline and Isaac Assor, both of whom are playing the bass-baritone role in the upcoming show.

Can you tell me about the Opera? When It was written? Style? Plot? About the Composer?
Isaac: Philip Glass and Alan Ginsberg began working together on the opera in 1988, when Glass accompanied Ginsberg reading his poem “Wichita Vortex Sutra.” After enjoying the collaboration, the two decided to create a full opera together, which premiered in 1990.

The opera is hard to characterize as having a traditional plot. The score does not list specific characters or stage directions. In the original production, the six singers (Bass-baritone, Baritone, Tenor, Mezzo-Soprano, Soprano 2, Soprano 1) represented six American archetypes. Our production expands upon the archetype idea, setting our characters in a sort of dystopian “church” in which the congregants worship the military-industrial-capitalist complex. The characters struggle with their worship of this “god” that their society has created, questioning the violence, social norms, and sexuality that has been forced upon them and that they perpetuate. The opera follows their journey to reject this dystopian machine in search of truer enlightenment.

The music is written in a minimalist style, characteristic of Philip Glass’s music, meaning that the musical figures are often repetitive, yet slowly expand and develop over time. The melodies, rhythms, and harmonies are relatively simple, and the musical intrigue is brought out by the orchestration and layering of patterns.

While poetry is always an important factor in opera, in this case Ginsberg’s poetry defines the music to the point that this cannot be seen as an opera by Philip Glass with libretto by Allen Ginsberg; this opera is a true partnership between the composer and poet. Ginsberg was one of the leading Beat poets, active from the 1950s through the 90s. He wrote on a variety of social, political, economic, and philosophical issues.

Alan: It grew out of a collaboration between Ginsberg and Philip Glass. Evidently they met in a bookstore in New York City in the late ‘80s and decided to do a piano and poetry thing together, which they enjoyed so much that they decided to scale up the work into a full-blown theater piece.

Philip Glass is an imaginative composer who has certainly made an impact on the world of music with his innovative and inventive musical ideas and bold approach to modern music. In Hydrogen Jukebox he has combined a tonal language that is accessible to a wide audience with some of the most vivid and edgy poetry in the English language to create a work that defies classification and has no equal. There’s jazz, there’s pop, there’s rock … it’s impossible to explain, so you’ll just have to come and see!

Isaac: The Bass-baritone role has been a highly rewarding challenge. In the beginning of the opera, he is the pastor of the dystopian church. Throughout the opera he questions his faith in this machine and struggles to find his true inner voice, rather than preaching on behalf of this repressive “god.”

Alan: The role is very challenging. There are certainly roles in standard repertoire that are longer or more complicated, but the sheer energy requirements and mental endurance are remarkable! From the time that I set foot on stage until the moment we take our final bows, the character is off stage for no more than two minutes. That means nearly two hours of constant vocalizing and perpetual motion. No water for the first 70 minutes or so and lots to remember!

Describe your preparation for a role of this magnitude.

Isaac: The biggest challenge in preparing this role has been internalizing the music and poetry in order to focus on creating a character. Studying the poetry and music was just the tip of the iceberg for this opera. More important is creating a through-line through the text and choreography, especially since the score doesn’t explicitly tell you the story. As a performer, you have to be sure of the story you are trying to tell so that you can create this world for the audience.

Alan: The first step I take always when preparing a role is to take a close look at the text. And even though the poetry is in English, with the surreal nature of the language used and the plethora of historical references, a translation process was absolutely essential. After that, it was trying to come to terms with all of the patterns and repetitive phrases that persist through the work. The longer that a performer has to get something like this into their body and into their consciousness, the better the chance that they can portray it better to an audience after all.

I heard that the bass-baritone role is based on Ginsberg himself. Is this true?

Alan: You may have heard right! Through the course of the work each of the 6 characters goes through deep changes, but one of the constant factors is that the Bass-baritone character is the font from which the poetry and the reality flows once the transformation begins. We transform essentially into a character that parallels Ginsberg in many ways, just in time to deliver a big monologue in the middle of the show, which was, coincidentally, the very poetry that began the Ginsberg/Glass collaboration. Tons of cool stuff here!

Isaac: In our production, as the preacher discovers his inner voice, he returns to a time in which he takes on the archetype of the Beat-poet, leading his congregation to reject the machine they once worshipped. In a way, the Beats were preachers in that they sought truth out of what they perceived as the lies surrounding them.

What is most exciting about working on this opera?

Alan: The most exciting thing by far about this project has been working with this wonderful cast. They never cease to amaze me with their level of dedication, infectious energy, and desire to produce a fantastic product for our audiences. When I discovered that I was the oldest member of the cast, I had no clue what to expect. I am proud to say that my colleagues have no equal in their performance of this material and that no matter what cast you see, it will be an unforgettable experience.

Isaac: The most exciting part of preparing this role has been working with such a small, intimate ensemble. The success of the opera depends on complete cooperation between the 6 singers.

Isaac: I have hinted at this earlier, but this opera is set aside in my mind in that the score leaves the production entirely up to the imagination of the creative team and performers. Our conductor, Benton Hess, aptly described it as a “blank slate.” Often, in the classic operas, the general story is already set, and it is the job of the director and performers to bring the story to life. Here, we have to create the story before we can tell it!

Alan: This opera is the definition of unique, and all I can say is that it must be seen to be believed.

Alan: Coming and watching this show takes no more time than a feature-length movie in a theater (no kidding!), and it will fill you with emotions and take you on a journey just as the silver screen can. But it also provides the chance to see extraordinary live performance art being made by shining stars of tomorrow’s world stage. Who could say no to that?

Isaac: All I can say is that this opera has truly captured the hearts and minds of everyone who has worked on this production. I cannot remember the last time that I have been this excited to share something with an audience.