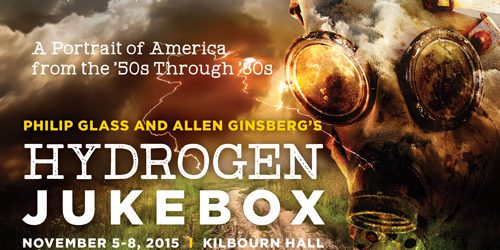 The seismic shifts in America’s cultural and political landscapes are reflected in words and music in Hydrogen Jukebox, a music theatre piece that will be presented by Eastman Opera Theatre November 5 through 8 in the Eastman School of Music’s Kilbourn Hall.

Setting the counterculture poems of Allen Ginsberg to the repetitive structures of Philip Glass’s music, Hydrogen Jukebox challenges the audience to think about militarism, governmental and institutional corruption, the sexual revolution, religion, drugs, industrial damage to people’s psyches and the environment, and other social and political issues. The work doesn’t have a traditional story line, but unfolds as a type of journey across several decades and across America.

Eastman Opera Theatre’s production of Hydrogen Jukebox opens in the 1990s and is set in a corrupted church that, in Ginsberg’s poetry, worships the corporate, military, and industrial machine of American society. Deceived by doctrines that claim to promote individual freedom, the congregation’s sole purpose is to feed the Moloch—the god they serve—with daily sacrifices of their work and identity.

Hydrogen Jukebox features six vocal parts that stand in for archetypal American characters. In Eastman Opera Theatre’s presentation, each of the vocal parts represents different characters in the 50s, 70s, and 90s. They are taken on a backward journey of both sung and recited words that moves from their present conformist lives, to their periods of growth and learning, to their early days of simplicity and unawareness.

The 90-minute production will be performed without an intermission at 7:30 p.m. Thursday, Nov. 5, Friday, Nov. 6, and Saturday, Nov. 7; and at 2 p.m. on Sunday, Nov. 8. Pre-performance talks will be presented one hour earlier in the Eastman School’s Ray Wright Room (Room 120).

Reflective of its subjects and of the times, Hydrogen Jukebox contains strong language and sexual references.

Tickets to Philip Glass and Allen Ginsberg’s Hydrogen Jukebox are $20 general admission; discounts with UR and student ID. They are available online at eastmantheatre.org; in person at the Eastman Theatre Box Office, 433 East Main St.; and by calling (585) 454-2100.