On Sunday, September 27, the Principal Brass, a quintet of principal brass players from the New York Philharmonic. performed at Eastman in the school’s Kilbourn Concert Series. A nearly sold-out Kilbourn Hall audience was treated to an impressive performance of famous French and American brass quintets and several virtuosic transcriptions.

As an added bonus, Eastman brass students had the opportunity to participate in master classes from each of the quintet members the following morning. I had the opportunity to talk with Lauren Eisenreich, a first-year Master’s trombone player from Pittsburgh, Pennsylvania, and Erika Izaguirre, a first-year Doctoral trumpeter from Austin, Texas, about each of their master class performances.

Lauren, a student of Larry Zalkind, performed Elizabeth Raum’s Fantasy for Trombone and Piano for Joseph Alessi, the principal trombonist for the New York Philharmonic. Meanwhile, Erika, a student of James Thompson, performed the first movement of Halsey Stevens’ Sonata for Trumpet and Piano for Matthew Muckey and Ethan Bensdorf, the acting principal and associate principal, respectively, of the orchestra.

John: Did you attend the Principal Brass Quintet concert on Sunday afternoon? If so, please tell us about your experience.

Lauren: Yes. I was blown away by their musicianship and the sheer level of talent. In particular, their blend and balance stood out to me. Everyone played with a similar sound quality that unified the whole group.

Erika: I did attend the concert that the Principal Brass Quintet performed on Sunday. It was an exhilarating experience. The level of musicianship and the energy that they presented throughout the entire performance is what was so captivating. 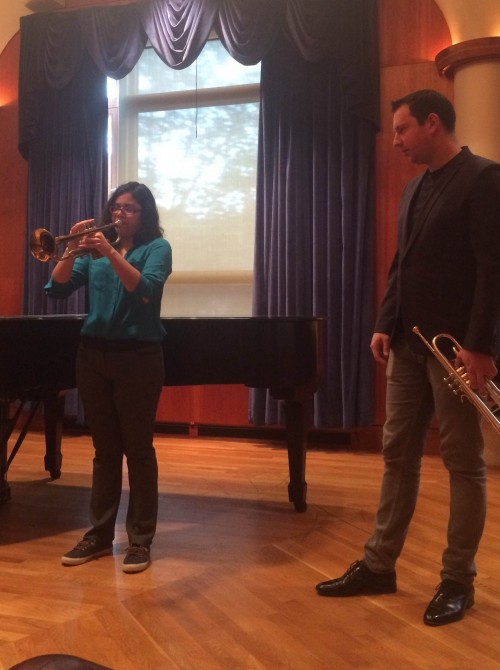 John: Describe your experience in getting to play for one of the principal players of the New York Philharmonic.

Erika: Both Matt Muckey and Ethan Bensdorf were present at the master class. I’ll admit that I was fairly nervous, but also very excited. Their response to my performance definitely put me at ease and has offered me a renewed sense of inspiration and confidence in myself as a musician.

Lauren: This is obviously an incredible opportunity. I was just so grateful for the experience that I actually was less nervous than I have ever been for a master class. I felt so excited to be able to perform that I wasn’t focusing on what could go wrong. When I felt myself getting nervous as I played, I closed my eyes and played from memory. This helped me to immerse myself in making music and not get distracted by the situation. 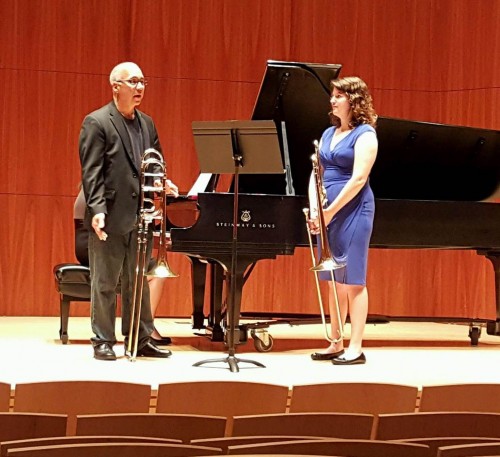 John: Would you care to share some of the general comments you received from the master class? What were some of the most insightful suggestions or comments about your performance?

Lauren: Most of the comments that I received pertained to rounding out my sound and having more gentle attacks. A particularly insightful comment related to how to end notes: he said that you should let notes rest because notes should rarely intensify at the end. One of the persistent comments that he made to almost everyone who performed was that we should not rely on the physical positioning of our instruments and that we should be prepared to adjust for intonation at all times. You have to be very aware of all aspects of your playing so that you can correct bad habits.

Erika: The best comment that I have ever received was from Ethan Bensdorf, who said that he didn’t have really any suggestions for me. They then went on to give me constructive criticisms. The one that is really staying with me is, in summary, to always play with your best sound. Other comments that they made to me were to work on creating longer musical lines and to add more contrast in my performance.

John: If there was a Q&A during your master class, were there any remarks or “words of wisdom” that inspired you?

Erika: There was a great Q&A afterwards. The overlying concepts were to really listen, and to pay close attention to details.

Lauren: One inspiring comment from Joe Alessi was: “The secret of life, the secret of playing, or the secret of music does become clear as you play more, because what you discover is that we sit there and practice all of the time and get frustrated. Yet, the best practicing that we can do is to put the horn down and simply sing and conduct.”