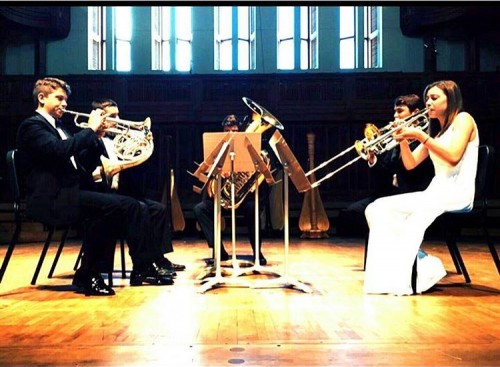 Trumpeter David Puchkoff with his brass quintet, performing in Ozawa Hall at Tanglewood.

The Tanglewood Music Center has become a summer home for young musicians from around the world for nearly eight decades. Located in Lenox, Massachusetts, Tanglewood has served as the summer home for the Boston Symphony Orchestra since 1937. I had the privilege of meeting two current Eastman students who spent their past summers at Tanglewood; they were eager to share their experiences with me.

David Puchkoff, a freshman trumpet student from Poughkeepsie, New York, was a member of the Tanglewood Institute Young Artist Orchestra: a six-week intensive training program for musicians who have not yet begun full-time college or conservatory study. David performed works by Copland, Bernstein, Prokofiev, and Bartòk, among others, in Tanglewood’s Seji Ozawa Hall.

Nathan Kessel, a sophomore voice student from Worcester, Massachusetts, sang in the Tanglewood Festival Chorus, the official chorus of the Boston Symphony Orchestra and Boston Pops Orchestra. Nathan sang in Act I of Puccini’s Tosca, Mahler’s Symphony No. 8, Beethoven’s Symphony No. 9, and a solo in Copland’s “Stomp Your Foot.”

What did your experience mean to you, specifically?

David: Tanglewood was the best orchestral experience I have had in my musical career. The caliber of players was just unbelievable. I knew I wanted to go to Tanglewood ever since I heard their inspiring performance of Stravinsky’s Rite of Spring from the 2013 program. After hearing it, I thought, “How do they get kids my age to play like they are professionals who have been together for years?” I quickly found that out right from day one in an orchestra rehearsal of Appalachian Spring. Our conductor was Ankush Kumar Bahl. Our second conductor was the famed Paul Haas. Right from the start they both held us to professional standards. The energy between all the musicians on stage just seemed electric. As the program director, Hillary Field Respass, said in her season opening speech: “It won’t take too long to experience the magic of Tanglewood.” She couldn’t have been more right. I made so many great friends and had such an amazing time making incredible music with the musicians around me.

Nathan: Tanglewood is unlike any other venue in the world. When you arrive, you are embraced by the harmony of nature and humanity. On the grounds, you can see a beautiful panoramic view of the Berkshire Mountains and the Koussevitzky Shed. Tanglewood is one of the most peaceful and magical places on earth. Performing under the stars with the Boston Symphony Orchestra, guest artists, the Tanglewood Festival Chorus, in front of adoring fans, is a unique experience. Every time I arrive to my seat on stage, my spine tingles and I can’t help but smile because I can’t believe that I am living my dream. The feeling is unreal and to communicate something bigger than all of us through music and song, to an audience of 20,000 fans who come from all over the world, is a privilege and experience I will never forget.

Did you meet and/or work with any notable musicians this summer?

David: The program provided three private lessons with the renowned faculty members. I was privileged to have three lessons with David Krauss, the principal trumpet of the Metropolitan Opera. I learned so much in just three hour-long lessons. He was also the coach of our orchestral brass sectionals and chamber groups. Mr. Krauss had so much knowledge to share with all the brass students. We all appreciated him so much that we designed and bought shirts with one of his most common quotes on it. It was an absolute blast to work with him.

We were also privileged with many master class opportunities with performers such as Karin Bliznik, Hakan Hardenberger, Tom Siders, and Benjamin Wright. They all spoke of the paths they followed to get to where they are today, and it was inspiring to hear they had problems or walls to get over in their playing just as I do. 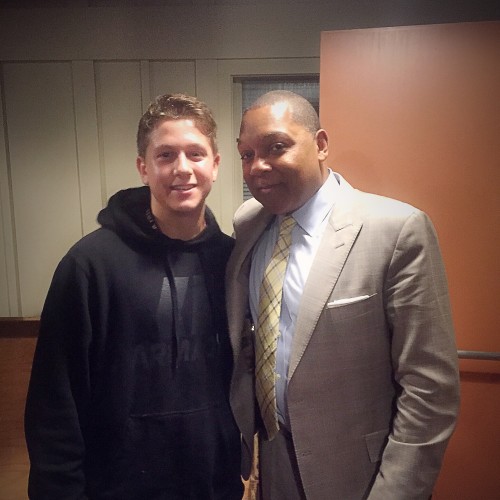 Were there any performers, coaches or conductors at Tanglewood who particularly impressed or inspired you? If so, who and why?

David: I really admire David Krauss; he is so humble and gives great feedback. He was there not only as an instructor but as a friend too.

Included in our tuition was a lawn pass to all Tanglewood events on the main grounds. I heard over 20 inspiring performances by the Boston Symphony Orchestra. This is one of the most important things in the education of a young musician: quality live performances. Every night they would put together a different program seamlessly. I really enjoyed listening to the BSO’s principal trumpet, Thomas Rolfs. Some works we heard include Saint-Saens’ Organ Symphony, Mahler 5 and 6, Stravinsky’s Petrushka, Strauss’ Ein Heldenleben and Tchaikovsky’s 1812 Overture with real cannon shots. It was a summer filled with amazing music making I will never forget. 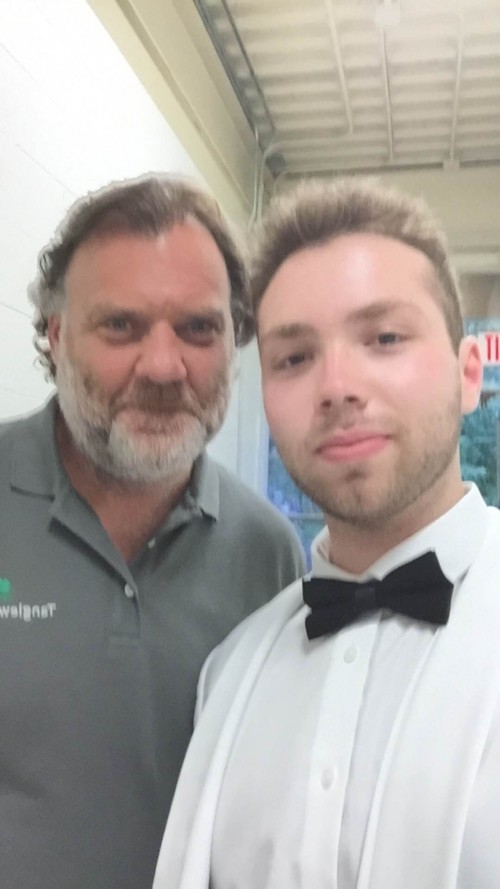 A selfie with Scarpia: Nathan Kessel with Bryn Terfel, who played in Tosca at Tanglewood.

Nathan: I think I was most impressed by bass-baritone Bryn Terfel, because of his excellent ability to communicate in multiple languages with ease. He manages to sing in Italian, German, English, Russian, etc., as if each language was his native tongue. It is inspiring to watch him work. I was also inspired by conductor Asher Fischer; he managed to take a piece of music that the choir and orchestra have performed a number of times, Beethoven 9, and bring many new ideas of expression and interpretation to the table. In addition, Maestro Fischer led a terrific final performance to close the Tanglewood season.

I asked Nathan, “How did your Eastman training prepare you for your experience at Tanglewood and your performances?”
My Eastman training prepared me extremely well for my experience at Tanglewood. I never understood how to emote while I was singing before I arrived at Eastman. As a freshman, I learned that not only is technique a pivotal aspect of singing, but also, diction is as well. Having had the opportunity to study with world-class coaches and teachers, I learned more in a year than I could have ever imagined. Eastman is an exceptional institution; it fosters a community that is extremely supportive and where peers want to help one another. It takes away the “competitive” aspect of music and creates a healthy environment for musicians to thrive and enjoy their craft.

And similarly, I asked David, “How do you feel that your Tanglewood experience will prepare you for the start of your studies at Eastman?”
As a brass player, all the playing we did at Tanglewood really put my chops in a great place to start school. Also it prepared me to think of music in a more detailed and refined way.

Do you intend to return to Tanglewood or to pursue similar experiences next summer? Why?

David: The Boston University Tanglewood Institute (BUTI) has inspired me on many levels. In addition to listening to the BSO performances regularly, we also were heard the Tanglewood Music Center (TMC) Orchestra in weekly concerts. The level of TMC was so high and extraordinary that I have made it my goal to audition as a fellow for a summer in my undergrad here at Eastman.

Nathan: I do plan on returning to Tanglewood next summer, 2016. Tanglewood is my home and I can’t imagine being anywhere else. Not only was I able to have an amazing musical experience but also, I met so many incredible people and made many friends, all of whom stay in touch and enrich my life. 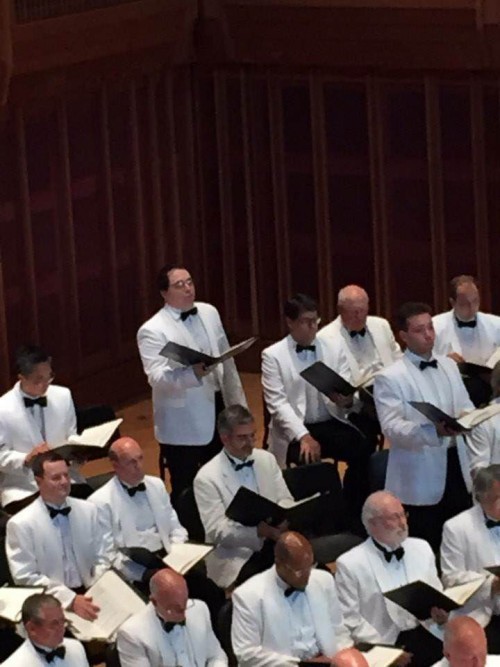 Nathan singing a solo with the Tanglewood Festival Chorus.