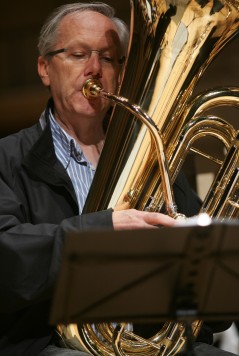 Charles “Chuck” Daellenbach (BM ’66, MM ’68, PhD ’71) is shown at a 2007 recording session with the Canadian Brass and Eastman Wind Ensemble (top), and receiving an honorary doctorate from the University of Rochester in the 2005 Commencement (bottom).

Canadian Brass co-founder and tuba master Dr. Charles “Chuck” Daellenbach was recently appointed to the Order of Canada, his country’s highest civilian honor. Established in 1967, The Order of Canada recognizes “outstanding achievement, dedication to community and service to the nation.” Presented on December 26, 2014 by his Excellency the Right Honorable David Johnston, Governor General of Canada, the appointment comes in recognition of Dr. Daellenbach’s lifelong work as Canadian Brass’s co-founder, and his critical role as a performer, mentor, and entrepreneur.

He stated, “This honor reflects and reinforces the considerable influence my colleagues, our mentors and I have had in establishing brass chamber music as a legitimate partner in the classical music world…”

I can remember as a young kid (not too long ago) watching the wonderful videos of the Canadian Brass. They were different from anything I had ever seen; “Chuck” and his colleagues fearlessly brought together the separate entities of performer and audience through wit, humor, and creativity, and for the first time I was able to sit through an entire performance of virtuosic works. Once criticized for talking to their audiences and including them in the performance process, the Canadian Brass’s concept of establishing a bond between performer and audience is now one of the pivotal reasons for why many of us play music in the first place.

Also, many colleges and universities, including the Eastman School of Music, now have entrepreneurship courses that teach us what Chuck and the Canadian Brass had to figure out pragmatically 40 years ago.

The model of audience participation, developed by Chuck Daellenbach and the Canadian Brass, is now the primary basis for brass chamber groups everywhere. The Canadian Brass has had a profound influence on my life through their remarkable repertoire and their genuine spirit of participation. 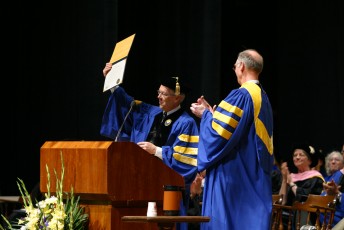